Norman Harris was born on 20 April 1920 and was serving in the Royal Army Service Corps when he volunteered for Airborne Forces in 1942.

He was on parachute course 16, at RAF Ringway in June 1942 and upon completion of the course he was posted to the Headquarters 1st Parachute Brigade. Initially he was the Medical Officer’s Orderly and served in this capacity in North African 1942-43. He handed over to L/Cpl. ‘Bill’ Hampson when he was posted to the Intelligence Section.

By September 1944 he was in a team of four men serving in the Intelligence Section at 1st Parachute Brigade HQ, based at Syston Old Hall in Lincolnshire, and took part in ‘Operation Market-Garden’, dropping onto DZ ‘X’ at Renkum near Arnhem, Holland on Sunday 17 September 1944.

“I was in the Brigade Intelligence Section, which consisted of one officer and four other ranks. Our officer was Captain WA Taylor, our Section Sergeant Richard Bennett-Goodman, our Corporal Horace Goodrich; I was the Lance Corporal and our Private Norman Willoughby.

Key personnel at HQ flew in two separate aircraft so that should one or other be lost Brigade HQ could function, albeit on a much reduced scale.

We flew from Barkston Heath and, to the best of my recollection, the first aircraft carried the Brigadier, the Intelligence Officer, the Intelligence Section Corporal and Private, the Chief Clerk, the Senior Signals NCO with a number of his section, and elements of the Defence Platoon.

The second aircraft carried the Brigade Major (Major ‘Tony’ Hibbert), Intelligence Section Sergeant and L/Corporal, the O.C. Signals Section (Capt. Marquand) with some of his section and elements of the Defence Platoon. The clerical staff were divided more or less between the two aircraft though some did land by glider.

The Brigade landed on Day 1, 17 September 1944, with orders to advance into and occupy the town and seize the main road bridge and railway bridge. We were to be reinforced on Day 2 by 4 Para Brigade.

We moved off from the Dropping Zone, some 7 to 8 miles away form our objective along three routes, the 1st Battalion taking the most northerly along the Amsterdam Road (Leopard Route), the 2nd Battalion along the Lower Road, close to the river (Lion Route) and the 3rd Battalion in the centre along the Utrecht Road (Tiger Route).

We, Brigade HQ, followed hard on the heels of 2nd Battalion on Lion Route. You will know from the many books you have read what occurred in the opening phases of the operation, how 1st and 3rd Battalions hit strong opposition, and how 2nd Battalion, meeting lighter opposition, manage to slip through into the town on the Lower Road. We followed them in and reached the North end of the Bridge at about 9 pm on the Sunday evening. The total force that reached the bridge was something between 600 and 700.

German reaction had been swift in blocking the 1st and 3rd Battalion routes and soon they sealed off the river road and we at the bridge were virtually surrounded. 1st and 3rd Battalions fought desperately to break through to us and were reinforced by 11th Battalion from 4th Para Brigade and 2nd Battalion, South Staffs from 1st A/L Brigade, but all to no avail.

In view of the terrible casualties these units were taking, the Divisional Commander, Major-General Urquhart eventually pulled them back to the Osterbeek perimeter and our only hope lay with 30 Corps reaching us in time from the South.

The buildings we were holding around the Northern ramp to the bridge took a terrific pounding from enemy tanks and self-propelled guns; and they eventually used phosphorous shells to set the buildings alight and burn us out.

Our building was the last to go, late on the Wednesday evening, and with the fire out of control and with something like 250 badly wounded in the cellar there was no alternative but to surrender the building otherwise the wounded would have been burned to death. Those of us who were still in one piece were ordered to leave and fight on, but with ammunition almost non-existent, organised resistance was impossible and we split into small parties to try to slip out of the town.

The Germans, as would be expected, were very thorough and flushed us out very quickly. We went into the bag shortly after first light on the Thursday morning. We never really did operate as a Brigade. Brigade HQ personnel fought as riflemen alongside the 2nd Battalion.”

L/Cpl Harris was taken a Prisoner of War and was held in Stalag 4B, a huge camp of some 16,000 men at Mulhberg, Germany. After liberation he returned to the Royal Army Service Corps in October 1945. 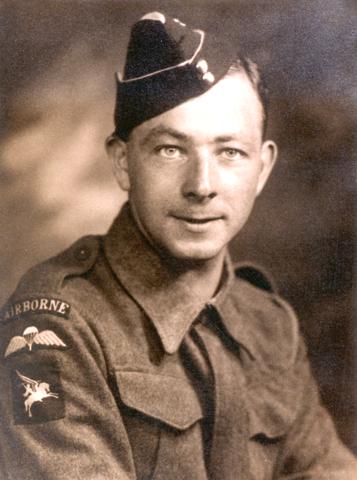