Lieutenant Poole served with A Squadron, 1 SAS, and took part in Operation Titanic.

On the night of 5 June 1944, a group of six SAS men, including Lt Poole and another officer, Lt Fowles, jumped into Carentan, Normandy to simulate a large scale landing. Using dummy parachutists, small bombs and detonators, the plan was to cause panic and confusion amongst the Germans in the area.

In the event, the group was dropped two miles from the agreed target, and were unable to find the containers which had been dropped with them. The four Troopers, Dawson, Saunders, Hurst and Merryweather, were also unable to find Lt Poole and Lt Fowles, and waited during the day in a ruined abbey.

A Frenchman brought Lt Poole to the abbey the following day, having found him after the Lt had knocked himself unconscious whilst exiting the small hatch in the aeroplane. Lt Fowles re-joined the group the next day.

The group remained in the area for the next three weeks, avoiding German units. They were joined by three American parachutists, and decided to try and cross back into Allied territory

Around 10 July, the group was surrounded and captured. Lt Poole and his men were made Prisoners of War, until liberation. Lt Poole was awarded a Military Cross for his actions.

He was promoted to Captain before the end of the war.

After the war Norman became a banker and was a regional manager for the National Westminster Bank, based in Bristol.

He retired in 1980 and lived in Somerset with his wife, Elisabeth, with whom he had two daughters.

By Rebecca Blackburn with information supplied by Anthony Kemp and the Plymouth Herald. 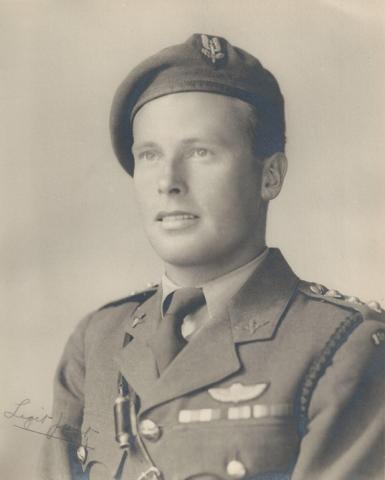