Noel Rosenberg was born on 15 November 1920 in Darnford near Lichfield in Staffordshire and was one of five children. He worked as a labourer prior to enlisting into the Army on 7 October 1937, and followed his elder brother Sam into The South Staffordshire Regiment, in spite of the fact he was only 5 foot 2 inches tall and younger than he claimed.

After passing out from basic training Noel was sent to India in 1938 and later to Palestine, where he was when the war broke out in 1939. In the early part of the conflict Noel saw action against both the Italians and Germans in Libya and it was whilst escorting Italian prisoners of war to Bombay that he heard of a request for volunteers for specialist units. Noel joined 151 Parachute Battalion in India in November 1941 just after his 21st birthday. The 151 Battalion later became the 156 Battalion when it transferred to the 4th Parachute Brigade.

By September 1944 Noel was a Lance Corporal in 10 Platoon of C Company, when he was deployed for Operation Market Garden, as part of the 1st Airborne Division's airborne assault to capture the Rhine Crossings at Arnhem.

Landing on Ginkel Heath on 18 September 1944, Noel took part in the early actions against the German blocking line on the Dreijenseweg before distinguishing himself in the hollow on 20 September when his company commander, Major Powell, was ordered to select one man to stay behind to provide covering fire for the general withdrawal towards Oosterbeek. Noel was the man selected and given a Bren with 12 full magazines, 6 Mills bombs, and 6 phosphorous grenades. The covering fire provided by Noel assisted the remnants of the 156 Battalion in their charge through enemy lines back to friendly territory. Noel manged to evade capture and rejoined his unit later after having a bayonet wound to his left hand treated.

He later distinguished himself in the defence of the Oosterbeek perimeter and was one of the few members of the battalion to cross the river during Operation Berlin, when the remnants of the 1st Airborne Division were withdrawn to the safey of Allied lines.

He was recommended for a Distinguished Conduct Medal but this was downgraded to a Military Medal and his citation is as follows:

"During the entire action at Arnhem this NCO was an example to all around him for his exhibition of coolness and courage under fire. On numerous occasions he volunteered to carry messages under fire; he personally killed a large number of the enemy at different times and whenever circumstances were serious he would be heard encouraging and steadying those around him. He was particularly conspicuous on the 20th September 1944 when the remnants of the Brigade were surrounded by the enemy in a hollow in the woods, standing up in full view of the enemy in the face of intense fire to direct the fire of other men on the enemy positions."

At Arnhem Noel received a field promotion to Sergeant, conferred by Major Powell.

After the Second World War he changed his name to Ross and was posted back to Palestine where he remained until the withdrawal of 6th Airborne Division.

Noel was recommended for the British Empire Medal while serving as a Colour Sergeant in the Far East Training Centre Nee Soon in Singapore, which was awarded in the New Year’s honours list announced in The London Gazette on 1 January 1968.

After a posting with HQ to Berlin (1967-70), Noel finished his military career at Taunton  HQ South West District as a Warrant Officer Class 2 and retired from the Army on 30 September 1974.

He settled in the Aldershot area and was the Army Families Housing Warden/Welfare Officer until his permanent retirement in 1996.

Noel married Barbara in May 1951 and had two sons. He was a staunch supporter of the 151/156 Parachute Battalion Association.

By Wendy George with assistance from Jon Ross and Niall Cherry

Article on Noel Ross from The Daily Telegraph, 12 June 2012.

From The Daily Telegraph 12 June 2012 . NOEL ROSS who died aged 91, won an exceptional Miliatry Medal with 156 Parachute Battalion at Arnhem. 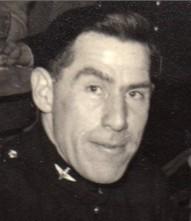