Mike Hall served as a glider pilot from 1942, although despite extensive training and flight experience, including involvement in the long haul Operation Turkey-Buzzard to North Africa, he was frustrated to miss the Airborne operations to Sicily and Normandy. His experiences at Arnhem with 14 Flight, F Squadron more than atoned for his earlier disappointments however.

Mike initially volunteered for service in the Territorial Army in 1939, and later enlisted into the London Irish Rifles. Disillusioned with the lack of action and poor conditions however, he transferred to the fledgling Glider Pilot Regiment, reporting to the Depot at Tilshead in March 1942. He learned to fly Miles Magisters at 16 Elementary Flying Training School (EFTS) at Burnaston outside Derby in late May 1942, qualifying as a pilot in time to move to RAF Weston on the Green near Bicester, to fly the Hotspur glider at No 2 Glider Training School (GTS).

Successful completion of his Hotspur training enabled his transfer to RAF Brize Norton at the Heavy Glider Conversion Unit (HGCU) to train with the heavyweight Horsa gliders. After just one hour of tuition, Mike flew a Horsa without an instructor on 7 December 1942. In January 1943, he moved on to Hurn Airport, near Bournemouth to combine training exercese with transport duties as his status as a qualified pilot became very useful.

Operation Turkey-Buzzard and training for the invasion of Sicily

As the war in North Africa neared an end, the Allies turned their focus to Sicily. With no Horsa gliders available in the Mediterranean, gliders were to be ferried by air from England to North Africa. Mike and a small band of selected pilots eventually relocated to Portreath, Cornwall to fly the mission, later known as Operation Turkey-Buzzard.

Each glider would have a crew of three Glider Pilots for the marathon 9-hour flight, and Mike and his fellow Turkey-Buzzard pilots began flying long distance navigation exercises all over Britain, towed by modified Halifax bombers.

Mike and his two second pilots, Sgt Roberts and Sgt Newton, set off from Cornwall on 21 June 1943, bound for Sale Airfield, near Rabat, Morocco. Despite Mike spotting an unidentified aircraft at higher altitude over the Bay of Biscay, he eventually arrived safely in Morrocco. The crews then proceeded across the Atlas Mountains and through North Africa in a series of shorter trips, first to Froha airfield and then later to Sousse, Tunisia.

This proved to be the main mounting bases for the invasion of Sicily, and Mike joined other Glider Pilots already established at Sousse. Despite their arrival as a kit of prefabricated parts, Mike joined the other pilots in the construction and flight training on the American CG4A WACO glider.

Using C47 Dakotas as tugs, and in spite of rudimentary airstrips prone to hazardous dust clouds on takeoff, Mike trained extensively for the Airborne invasion of Sicily. With extensive experience and training in North Africa, Mike would be frustrated in his wish to fly on Operations Ladbroke however. In hindsight Mike was perhaps lucky. Operation Ladbroke was a disaster. In poor nightflying conditions, many gliders were cast off way out to sea and over 300 soldiers from 1st Airlanding Brigade drowned off Sicily.

Mike then missed the later Operation Fustian, before deploying as an infantryman during the seaborne invasion of Italy, landing at Taranto in September 1943. After a short stay back in North Africa, Mike returned by sea with the bulk of the GPR to England.

In some leave and refresher training in early 1944, Mike was posted to RAF Blakehill Farm arriving in March 1944 as a Staff Sergeant. Now a designated First pilot, he was paired with Sergeant George Hogg, one of the new GPR second pilots. Mike and George got on well from the outset, and first flew together in a Horsa on 8 March 1944. In April 1944 Mike teamed up with SSgt Wally Holcroft, a friend from his EFTS days.

They were soon on the move to RAF Wroughton, near Swindon, gaining flying hours and experience transferring new Horsas to their new squadrons. However, this soon gave way to intensive training as the 1st and 6th Airborne Divisions were prepared for D-Day. Despite his relative experience, this period did not pass without incident and he was fortunate to survive unscathed from a crash landing, when poor visibility in a thick ground mist obscured one night-time landing at Netheravon, destroying his glider. Mike was involved in numerous special exercises that summer but after missing the Sicily invasion, he also missed D-Day after being nominated as a reserve.

The next big Airborne operation would part of be Operation Market Garden. Mike and Wally were both members of 14 Flight, F Squadron. Pilots from 14 Flight were due to take off from Blakehill Farm on the First Lift on 17 September 1944 bound for Arnhem, commanded by Lt Pickwoad DFC. Paired with Sgt Hogg, Mike flew Horsa HN 835, carrying a Platoon of the Border Regiment to Landing Zone S. Being among the first wave of gliders he could quite easily pick his own spot to land on the designated LZ. He later realised his good fortune as he watched the remaining gliders landing in large numbers – each one having less space to do so as time progressed!

‘Just after lunch we heard the drone of aircraft engines and it was a wonderful sight to see the paratroopers floating down and a mass of gliders coming in to land. There were more casualties on this lift as the Germans were now prepared.’

Their duties at the Landing Zone complete, F Squadron joined other glider pilots of 1st Wing in defensive positions around the 1st Airborne Divisional HQ established at the Hartenstein Hotel in Oosterbeek. Mike played a role in guard duties over the German POWs held at the Tennis Courts near the Hotel building. Later, 14 Flight dug new defensive trenches further from the HQ, and Mike and Wally Holcroft prepared to hold their ground, with Mike responsible for a Bren gun.

Mike and 14 Flight were subsequently employed on a series of fighting and anti-sniper patrols. They were also engaged by German self-propelled artillery on more than one occasion. Over the next few days and nights 14 Flight was slowly pushed back through woods and houses as the Germans squeezed the Perimeter.

Despite the conditions, the men of 14 Flight continued to fight on until news finally came, early on 25 September of the escape plan, Operation Berlin for the night of 25-26 September 1944. Mike and his comrades would eventually cross the river that night onboard a small engineer assault boat despite heavy rain and mortar fire. He had made his escape from Arnhem.

Reaching the relative comforts of a reception centre, he was even able to get a wash and shave at Nijmegen, before he was flown back to the UK a few days later.

It was only then that the reality of the battle began to sink in, when a briefing from Lt Pickwoad confirmed the deaths of 11 men from the Flight, and another eighteen wounded, prisoners or missing - a third of the Flight.

Mike continued to serve on however, and was eventually posted to India where the Indian Airborne Division was preparing for the invasion of Japan. Although the Japanese surrender in He was to fly the WACO glider until the end of the war.

Staff Sergeant Mike Hall survived the war and was demobbed in 1946. He is still an active member of the Glider Pilot Regimental Association.

Mike Peters, Glider Pilots on Sicily, (), Pen & Sword Ltd. Mike Peters & Luuk Buist, Glider Pilots at Arnhem (2009), Pen and Sword Mike Hall, What did you do in the war Daddy? (Unpublished). 'Portrait of a Pilot', The Eagle Magazine (April 2010). Walter Holcroft, No Medals for Lt Pickwoad

On return from leave F Squadron left Blakehill Farm with many regrets, as it had been a happy posting, and moved up north to a prewar airfield at North Luffenham, near Oakham.

Mike Hall volunteered for service in the Territorial Army in 1939 and later enlisted into the London Irish Rifles.

The RAF codenamed the glider delivery mission as Operation Beggar, the GPR came up with the very apt ‘Operation Turkey-Buzzard’. 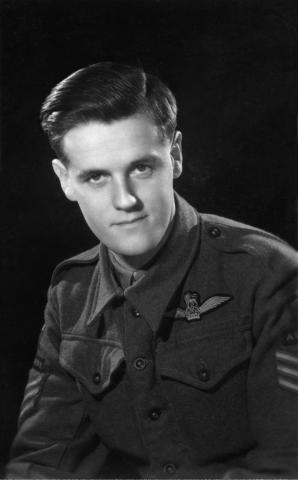