Michael St John Packe was born in Upperton, Eastbourne, Sussex on 21 August 1916. His father was Lt Col EC Packe of Leicester. Michael was the younger brother of Charles and Robert, all of whom played cricket for Leicestershire (Michael between 1936 and 1939). He was educated at Wellington College and the University of Cambridge, where he read history.

He was granted a commission as a Second Lieutenant in the Royal Army Service Corps (Supplementary Reserves, Category B) on the 29 February 1936, and was then promoted to Lieutenant on the 1 March 1939.

He was mobilized on the 24 August 1939 (apparently receiving the news whilst in the midst of a cricket match for Leicestershire against Derbyshire), and promoted to Acting Captain on the 12th September 1940. He had been posted to the 2nd Infantry Division as the Supply Column as the Echelon Supply Officer and had disembarked in France on the 26 September 1939. He took part in the campaign in France and Flanders and was evacuated back to the U.K. on the 30 June 1940.

He was promoted to Major and Company Commander on the 11th January 1941, and was then posted to the 1st Airlanding Brigade Group Company, R.A.S.C. as O.C. on the 30th March 1942.

He completed Parachute Course 16 at R.A.F. Ringway, which ran from the 22nd to 27th June 1942, where he carried out two descents from a balloon, and two descents from a Whitley aircraft to attain the necessary standard of efficiency required to qualify as a parachutist.

It was Major Packe who came up with the idea of using wicker baskets or panniers, as they became known, for dropping supplies.

He saw service in North Africa from the 26 May to the 8 September 1943. On the 9 September he landed at the Italian port of Taranto as part of Operation ‘Slapstick’, which was the 1st Airborne Division’s landing from a fleet of Royal Navy Cruisers.

He disembarked in the UK on the 18 November 1943, and was appointed CRASC, with the rank of Acting Lt-Colonel on the 13 December 1943.

He was awarded a Mention in Despatches on the 24 August 1944.

The Commander of the Royal Army Service Corps in the 1st Airborne Division, for Operation ‘Market’, he landed at L.Z. ‘X’, Renkum Heath on the 2nd Lift, Monday, 18th September 1944. He had been flown in a Horsa glider, piloted by Lieut. John Bewley and Sgt. Albert Midgley, who relates some details of his glider load, journey and landing, etc, “18th September – Fairford – ‘G’ Squadron. 1st Pilot: Lt. John M. Bewley. Glider: Horsa Mk I. Tug: Stirling, 190 Squadron, R.A.F. Glider No: LH346. Chalk No: 941. Landing Area: L.Z. ‘X’. Occupants: Lt-Col. N. St J. Packe (Supplies) and approx. 8-9 men RASC, Jeep and trailer. No problems on flight (northern route), some light flak, and we made a good landing, no damage at all to glider. Released the tail and unloaded, sporadic small arms fire, difficult to assess from what direction. We set off with our passengers (instructions were to stay with them as long as they needed us) on our way, as we thought en route for Arnhem, alongside troops of the South Staffs Regiment. Fairly quiet at first, I vaguely remember Wolfheze Station.”

After a fairly smooth flight, with only slight flak, they arrived over the L.Z. and were released from their tug-aircraft, and started to descend, “They were low now, running over plough. [Packe] saw dust clouds filled with an ominous black-blue smoke, but there was no time to wonder about them because they were down - down with no more than a jolt - down and settling. He gave the signal; everyone gathered up their weapons, undid their safety belts, stood up crowding towards the door. They all knew what to do, that they had to get out quickly to tackle the grey-uniformed enemy who would be surrounding the glider, so that the others could get the tail off and unload the precious transport. James stood with his hand on the door handle, and his gallant band thronged round him bristling with inexpert weapons; he felt proud of their eagerness. They had stopped. He pulled the handle, and they all pressed forward behind him. He pulled again, harder; he swung his whole weight, he hit the handle with the butt of his Sten gun. The glider was sourly achieving its revenge by a last-minute stubbornness. They were stuck. It was ridiculous. [Bewley] removed his flying helmet, settled his controls and came back to assist. The door was freed and they all tumbled out. There were no Germans.”

According to the H.Q., R.A.S.C. War Diary: 1415 hrs. CRASC, Adjt and 9 ORs landed successfully at Oosterbeek, Holland.  Gliders unloaded under heavy Mortar and small arms fire. “Presently the tail fell away with a great crash, and they hastened to extract the long metal troughs down which the jeep was to run to the ground. [Packe] seized one side of one of these and the freckled Corporal rook the other. It was heavy, although only a foot wide; as they faced each other across it they had difficulty in raising it up to the open end of the truncated glider. Suddenly the narrow width of trough between their hands emitted a violent metallic clang and leapt from their grasp. The corporal’s face was a study of astonishment. Quickly they finished the job; then [Packe], with a gait so slightly hastened as to be not quite dignified, proceeded round to the other side of the glider. Behind, there came again those dust clouds with their black blue filling which he now identified as mortar fire. The earth spurted brown around them; every so often there came the crack of a bullet passing overhead, or the thin mournful whine of a ricochet.”

Lieutenant-Colonel Packe was awarded the Dutch Bronze Cross after Arnhem. His citation reads:

"This officer was Commander Royal Army Service Corps of the Division during the battle of Arnhem, 17-25 September. The Division was resupplied from the air during this period and, owing to enemy action and the confined area in which the Division was fighting, the collection of these supplies was a very hazardous business. Colonel Packe so directed and organised the collection that, in spite of very heavy enemy fire and the extremely difficult conditions, the majority of the supplies which dropped within or near the Divisional area were brought in and distributed.This officer was constantly under fire. His cheerful demeanour and his determination to carry out his task in spite of appalling difficulties was stirring example to those under his command."

In late 1945, Lieutenant-Colonel Packe was put forward for the award of Officer of the British Empire, the Citation for which reads:

"Lieutenant-Colonel Packe took over command of the Divisional RASC in November 1943 and was responsible for the reorganisation on the present airborne War Establishment. He has at all times maintained the highest possible standard in his work. This work was tried out to the full during the many moves entailed by some fifteen operations during 1944 which were planned and not executed before that on Arnhem. During the Arnhem operation his arrangements for maintenance were excellent and the fullest use was made of the stores received. Despite the conditions and of the enemy fire, Colonel Packe was indefatigable in his efforts to keep the Force supplied. Owing to the heavy losses during this operation, Lieutenant-Colonel Packe had once again to reform, reorganise and train the whole Divisional RASC. However, he was undeterred by the many difficulties that existed, and with untiring enthusiasm he succeeded in bringing his units up to the standard of efficiency required in Airborne Forces. On 6 May 1945 the Division was given 48 hours’ notice to move to Norway emplaning from aerodromes in Southern, Eastern and Northern Commands and landing in Oslo and Stavanger. Once again this called for the highest standard of work and efficiency from the RASC in the movement of personnel to the very scattered airfields with limited resources in transport and preparing the maintenance and resupply plan at two places in Norway. Once again this was entirely successful. On arrival in Norway he performed the duties of DDST for the first three weeks, which entailed the maintenance of all Allied Forces in Norway, the laying out of base supply installations and reception bulk supplies and POL from the first two convoys, all of which were done with the skeleton HQ RASC and the Light Composite Company RASC which came by air, supplemented by German transport. Lieutenant-Colonel Packe's outstanding work, cheerful spirit and his abounding energy in both battle and preparation for operations has at all times earned him the respect of both his superiors and subordinates."

However it was not awarded.

On the 11 May 1945, as part of Operation ‘Doomsday’, he flew to Norway, where he had been appointed the DDST Norway Command, with the rank of Acting Colonel – a post he fulfilled until the 1 June.

He returned to the UK on the 28 August 1945, where it was soon after announced that the 1 Airborne Division was being disbanded.

After overseeing this act he was posted to No 1 Holding Battalion, RASC on the 20 November 1945.

In 1946 he was demobilized and moved to Alderney, where he grew vegetables commercially, wrote, and was involved in the island cricket team. He married Kathryn Wharton Smail on the 21 February 1948, a niece of Edith Wharton.

From Frank Steer’s notes in the 1990’s: “Decent chap, personal friend of Urquhart, had General’s ear. A most competent officer. He could talk well to junior officers and soldiers”. This was the summing up of Lieut Richard Adams.

Michael St John Packe died of a brain tumor on Alderney on 20 December 1978. 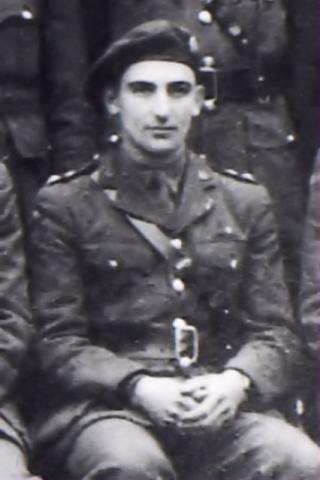