Lt Gen Sir Mike Gray was born in May 1932. He enlisted into the Royal Artillery in 1950  and was later commissioned into the East Yorkshire Regiment in 1952, spending his first two years with them in the Malayan jungle during the Emergency.

He transferred to the Parachute Regiment in 1955 and went onto serve in Cyprus, Suez, Jordan, Bahrain, Aden, Radfan, Kenya and Northern Ireland.

Mike Gray was a long standing Chairman of the Airborne Assault Normandy Trust and helped to create two museums in France. In recognition of these efforts he was awarded the French Legion d'Honneur in 1994. He also served as  Lieutenant of the Tower of London from 1995 to 1998.

Profile to be updated.

One of the delights of Airborne Forces is the characters it has nurtured.

My Dears....as a family we were truly astounded at the response over Michael's sudden death, with all the wonderful letters, cards, emails received, and kind messages posted onto the internet. 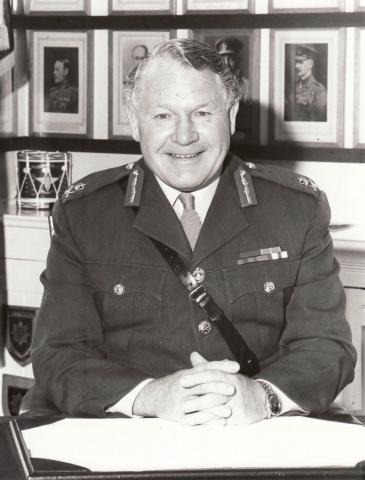