Captain Mike 'Joe' Irwin, from Harrow, enlisted into 10 PARA, a Territorial Army unit, in the 1970s and was commissioned on 5 April 1981.

In November 1996, while serving as the Battalion's Operations Officer, he led a six man team during a training exercise in the Brecon Beacons, South Wales. Blizzard conditions set in resulting in one soldier developing hypothermia.

Captain Irwin set off to raise the alarm but fell victim to the freezing and inhospitable conditions and died. It was his 39th birthday. 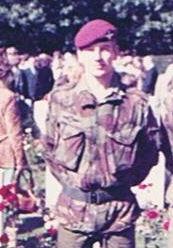 Robin Alistair (Bob) Sturtivant said:
Mike (Joe) Irwin Joined 3 coy 10(V) Para in the Summer of 1976 and served with 3 Coy till he was recommended for Officer Cadet having been a L/Cpl in 3 Coy for 1 year, he then went to 2 Coy and eventually Made the Rank of Major, but reverted to Captain after a years sabbatical to focus on his cleaning business.
Add your comment