He attended Recruit Cadre 3/75 which had Sergeant Major Edwards as course SNCO.

Private Clifford attained his wings at Abingdon jumping onto the DZ at Weston on the Green on 17 October 1975, during his military career he jumped from the balloon, C130 Hercules and twice from a Huey Helicopter in Nord Atlas Toulouse France and Vogelzang Germany.

Promoted to Lance Corporal after attending the Junior NCOs Tactical Wing No 8 at Brecon c1980.

He recalls playing in the TA Football Final at Altcar Ranges against 238 Sqn RCT but lost 1-0.

Mick Clifford emigrated to Australia in April 1982 and still keeps in contact with his old comrades. He is currently a member of the Airborne Forces Association Western Australia. 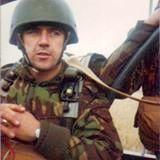