Mervyn Coggins, born in Hotwells, Bristol, was a postman before he was called up to join 9th Battalion,The Devonshire Regiment, in April 1940.

He applied to join the Airborne Forces in February 1941 and finally joined them in November 1942 and was attached to the HQ 1st Airborne in Rayleigh, Essex. In April 1943 he started with BNAF in North Africa, initially in Mascara, Algeria. In October he was in Kairouan, Tunisia and took place in a raid on M'sakin.

In August 1944 journeyed via Caen, Amiens, Tournai, Louvain, Brussels towards Arnhem, probably as part of the 'sea tail' force supporting operations in this area. In May 1945 moved to Oslo as a part of the liberation force. Invited to tea with King Hakon soon after his return to Norway in June. Mervyn was eventually released from service 14 March 1946.

Created with imagery and information kindly supplied by Steve Coggins. 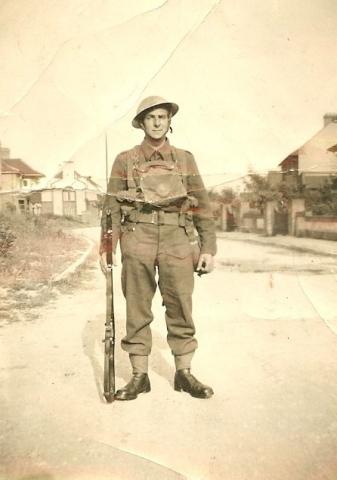