He originally enlisted into The Essex Regiment and volunteered for Airborne Forces in April 1944. [1b]

Officially listed as transferring to the Army Air Corps (Parachute Regiment) on the 19 April 1944, he attended the selection course at Hardwick Hall and then went to RAF Ringway on the 13 May 1944, where he attended Parachute Course 116. He was part of a large group of reinforcements and upon completion on the 29 May 1944 he was sent to the Holding Company, No 1 Airborne Forces Hardwick Hall. His Parachute instructors comments: ‘Good jumper. Well disciplined. Has leadership, high morale’. [2]

It was several weeks later that he was posted to the 3rd Parachute Battalion, then stationed at Spalding in Lincolnshire. Here he was assigned to 3 Platoon, ‘A’ Company, which was commanded by Lieut. Bertram Ash, and the Platoon Sergeant was Arthur Evans.

On Sunday, 17 September 1944, he boarded a Dakota aircraft of the 314th Troop Carrier Command, USAAF at Saltby airfield, to take part in operation ‘MARKET’. On board this aircraft (C/N: 68) were members of 3 Platoon, and the Chalk Commander was Lieut B Ash, half his Platoon and part of ‘A’ Company Headquarters. They landed successfully on DZ ‘X’ and moved off to the RV [3]

In answer to a Casualty Department enquiry about Pte’s. MR Lucena and LP Ball, Pte Thomas Kelly of ‘A’ Company wrote: “The only information I can give is that I was No 19 in the plane, I was the last man to leave the aircraft, everybody left the plane and when I was airborne I can definitely state that all the ‘chutes opened, but when I landed I had to go to a different rendezvous, that was the last time I saw the aforementioned soldiers.” [4]

On the way along ‘Tiger’ route, near the ‘T’ junction where the lead elements of the Battalion had killed the German General, they came under sustained machine-gun and mortar fire from their left (North), and counter-attacked the German troops, driving them back having inflicted several casualties on the enemy and taking some prisoners, but suffering several themselves. At this stage Pte Lucena was still with his platoon, and unwounded.

In his reply to the Casualty Department enquiry for information about Pte’s Lucena and Ball, Pte Hugh Smith, of 3 Platoon wrote: “I remember seeing both No. 14675861. Pte. M.R. Lucena and No. 14692185 [Pte Ball LP] on the day, 17 Sep 1944. Both landed on the DZ and went to join their respective Sections. Pte Lucena would be a man about age 21 or 22. I never came in touch with him again or heard any more about him. Pte Ball landed and made his way to our Coy Rendezvous at the small wood on the outside of our DZ, from there we made our way to the main road to Oosterbeek. Just outside the village we came under fire at the ‘T’ shaped junction on main road. He was then with 8 or 9 Section, 3 Pln, 3rd Bn Para Regt, after that I never saw him again, but heard from one of the other boys, he had been hit.” [5]

After stopping near the Hartenstein Hotel for a few hours the 3rd Parachute Battalion then pushed on, in the early hours of the 18 September, to the Western outskirts of Arnhem.

Pte George Finlow, also from 3 Platoon, stated in a written reply to the Casualty Department enquiry about Pte Lucena: “This boy was in the same plane and Section as I, and was with me till the 18th Sept, Monday (night), but next morning we were separated, and I never saw him again. He was in good health up to then.” [6]

Between mid-morning the 18 September through to the early hours of the 19 September the 3rd Parachute Battalion either held positions around the area of the Rhine Pavilion and the Utrechtseweg/Onderlangs junction, or attempted to break through the German blocking line to the main road bridge in Arnhem, to reinforce the 2nd Parachute Battalion there. The final attack to get through was driven back with heavy casualties, leaving behind isolated pockets of men, who continued to hold their positions until killed or overrun and taken prisoner. One of these was Cpl. Robert Allen, from 3 Platoon, and he wrote the following reply to the Casualty Department: “On the 19 Sept 1944 I was with a group of parachutists holding a position on the north bank of the Rhine. We were two or three hundred yards away from the [pontoon] bridge in Arnhem, and about eighty yards away from the north bank of the river. We were trying to break through to the bridge. Both the above mentioned Pte’s were there. About 1400 hrs we decided to change our position. I moved out with a Bren gun to give covering fire, while the remainder moved. As far as I know Lucena and Ball moved with the rest. I was pinned down by enemy fire for a while and was not able to contact them anymore. Both Pte’s only joined my Platoon two days before the operation, so I do not know very much about them.” [7]

Pte Mavesyn Ross Lucena was reported as killed in action on Tuesday, 19 September 1944, aged 19. He was initially buried in a mass grave at Moscowa Cemetery, Arnhem.

The son of Mr Ross Lucena and Mrs Beatrice Lucena, he now lies at rest in the Arnhem/Oosterbeek War Cemetery, 20. A. 11. 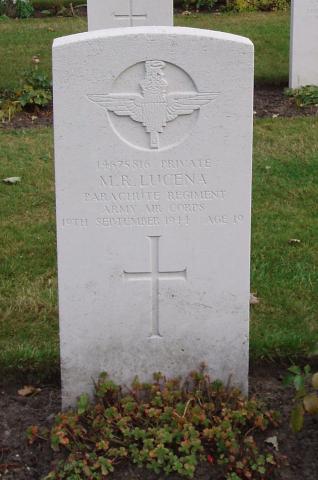