The Reverend Maurice McGowan, brother of Reverend Daniel McGowan was born on 5 February 1916 in London.

Educated at Finchley Grammar school, he went on the Seminary of St Edmund’s in Hertfordshire and was ordained as a Priest in 1939.

He joined the Royal Army Chaplains' Department on 3 November 1941.

Whilst on parachute course 91 at RAF Ringway, he suffered a strained calf muscle, due to a backward landing from a night balloon jump. After completing the course a month later, in May 1943, he was posted to the 6th Air-Landing Brigade before joining 21 Army Group by the end of the year.

Reverend McGowan landed in Normandy on D-Day with the 6th Airborne Division by glider. He was wounded by an explosion, and sustained several injuries, one of which left him deaf in his left ear, while assisting in the clearance of his glider under heavy fire.

He was awarded an MBE for his actions in Normandy.

Rev McGowan continued to serve with the 6th Airborne Division, and saw action in the Ardennes in December 1944. He was attached to 1st Battalion Royal Ulster Rifles (1 RUR) during the Rhine crossing, where he was again wounded by enemy fire on 25 March 1945.

Between 1945 and 1954 Rev McGowan’s post war service included postings in the West Country, Malta, Greece and Gibraltar. In 1956 McGowan was promoted to Staff Chaplain and commenced his last tour of duty in Tripoli in 1959.

Rev McGowan suffered a heart attack on 18 June 1959 and died shortly after. He was buried with full military honours in the British Military Cemetery, Tripoli.

The following extract is from 'An Appreciation of Reverend Maurice McGowan' by the Right Reverend Mgr B Navin CBE:

'Maurice McGowan was by nature quiet and retiring, and yet had the great gift of drawing people to himself…his endurance of pain, resulting from various illnesses over the years, seemed to make him more sympathetic to the sufferings of others at all times…he himself was generous to the extreme, and yet always appreciated greatly any small act of generosity to himself. Other people’s problems immediately became his problem when any appeal was made to him for assistance, and on such occasions nothing was too much trouble for him.' 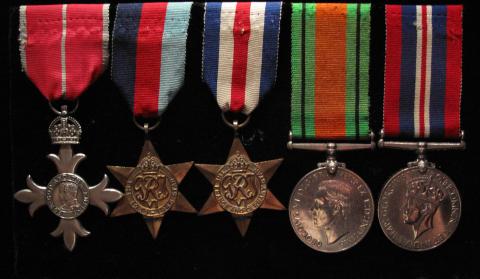