In March 1945, Gunner Gallery took part in the Rhine Crossing, during Op Varsity and served as Driver to Lt Peter Stoop.  Lt Stoop recorded taking off in the glider behind a Halifax tug with Bdrs Savitsky and Brown, and Gnr Galley on 24 March 1945 at 0751hrs.  He went on to describe their landing at 1053hrs in dense artificial smoke, their position coming under fire as they unloaded.  The jeep and the trailer was driven out of the glider by Galley.

There was some confusion as to whether they had landed near their intended objectives:

“Where are we? That’s not ‘Bunty’. I though quickly and as soon as the kit was on, ordered Galley to drive to the edge of the woods, carelessly leaving all the effective weapons on the jeep. We dived under a bank where there was a little dead ground. Unfortunately just as Galley was turning off the engine, a sniper in the woods – only 10 yards away – got him. He died instantly and slumped over the wheel. I felt for a moment or two that I had caused his death, but realised that war always costs a price.”

Compiled from material donated by the family of Maurice Galley. 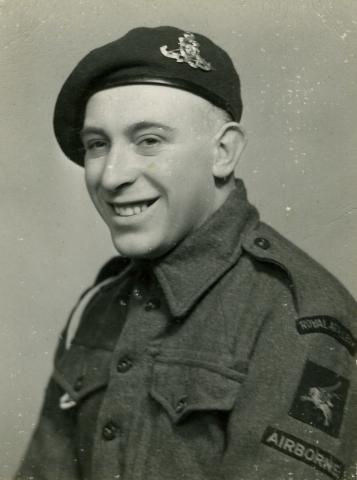