Martin ‘Paddy’ Vokes was born in Tipperary, Ireland, and enlisted into the British Army in 1944.

He volunteered for airborne forces and qualified as a military parachutist after attending course 132A, which ran from 5 to 11 September 1944 at RAF Ringway.

Martin served on operations in Italy and Norway with 2 SAS Regiment before its disbandment in late 1945.

He remained in the Army Air Corps and transferred to The Parachute Regiment, where he stayed for the rest of his Army service.

In the late 1950s he was promoted to Colour Sergeant and posted to D Company 1 PARA. This was followed by a Quarter Master’s posting in Headquarters Company at the Regimental Depot.He returned to D Coy 1 PARA as Company Quarter Master Sergeant.

Towards the end of 1961 Martin was injured in Exercise Solinus with 1 PARA. This entailed an air transported move to Malta and the execution of a battalion group airborne assault in North Africa. Unfortunately Martin broke his ankle when he landed on the drop zone (DZ) at Martuba.

He retired from the army in 1966 after 22 years’ service, and joined the Post Office where he remained until his ‘full’ retirement. 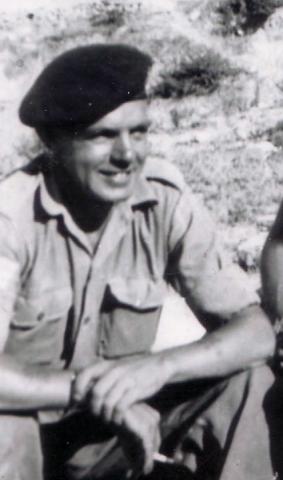