Mark Steven Dodsworth was from Walsall and joined the Junior Leaders Regiment at Shorncliffe, Folkestone, straight from school.

Upon reaching the age of 17, he joined The 3rd Battalion The Parachute Regiment (3 PARA).  As the Battalion was deployed in Northern Ireland, and Mark was not yet 18, he was sent to Melton Mowbray to train with the Army Dog Unit and was finally sent to Northern Ireland on his 18th birthday.  Stationed at Long Kesh Prison with the Dog Unit, Mark later trained with Sniffer Dogs, before being recalled to the Battalion in 1981.

Mark's father, Bryan, also served in 3 PARA and fought in the EOKA Campaign in Cyprus. 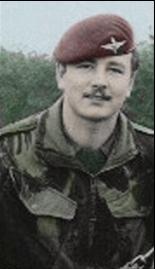