Served with 144 Parachute Field Ambulance Nottingham Detachment from June 1983 until January 1986. Passed P-Company in September 1983 and qualified as a combat medical technician in April 1984. Completed my Parachute training course at RAF Brize Norton in the July of 1984. Went to Denmark in the September of 1984 on Unit exercise for three weeks.

Joined 23 SAS in 1987 where I qualified as special forces driver gaining my HGV and hazardous materials License. Also qualified as an NBC instructor and Assault Pioneer and was promoted to Lance Corporal. Trained in Tactical Air Landing Operations. Trained in combat survival, escape and evasion and neutralising of enemy guard dogs. I also got to use a lot of different kinds of weapons from all parts of the World. Did several exercises in Germany and Denmark for two and three weeks at a time. A very interesting time of my Army life.

Joined the 4th Parachute Battalion The Parachute Regiments 16 Detachment based in Nottingham in 1994. Became the Battalion Medic for the detachment, which included a Sniper and Reconnaissance Platoon, and a Rifle Platoon. Finished my time with the Army in the Summer of 1997.

Now, having been a member of the Nottingham Branch of the Parachute Regiment Association(PRA) for the last two and a half years, I currently hold the position of Treasurer.

We are always looking for new members. Anyone wanting to join the Branch should come and see us at the Royal British Legion, 16 Hall Croft, Beeston, Nottingham, on the 3rd Wednesday of each month from 7:30PM onwards. 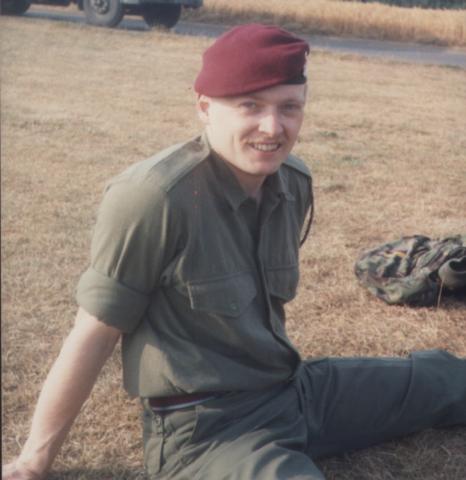