Alexander William Lipmann Kessel was born in Pretoria in December 1914, to Jewish parents who had settled in South Africa at the turn of the 20th century. His father was Lithuanian and his mother German. He later dropped his first two names and was known by his third name of Lipmann or 'Lippy'. He originally attended university in South Africa, but moving to London where he worked at St Mary’s Hospital, Paddington during the 1930’s to study medicine. He qualified as a doctor in 1937, and after a number of civilian medical jobs was called up in March 1942 to join the Royal Army Medical Corps.

After receiving his initial training, he volunteered after initial training for the Airborne Forces. He passed through Ringway in September 1942, and was posted as a Section Officer to 16 Parachute Field Ambulance RAMC in December 1942, which was then based in North Africa as part of the 1st Parachute Brigade. He took over command of No 3 Section in the early part of 1943.

By March 1943, he had been regraded from a General Duties Medical Officer to a Graded Surgeon, and took over one of the two Parachute Surgical Teams, the other commanded by Maj Longland. These two Surgeons remained in charge of the 16 Para Field Ambulance right up until the end of the Arnhem operation.

Lippy’s first operation was to be Operation Fustian on the night of 12-13 July 1943, when the Brigade was tasked with seizing and holding the Primosole bridge in Sicily. Unfortunately it was not to be as he never got to leave the aircraft. Bound for Sicily, the aircraft received anti-aircraft and machine gun fire near the intended DZ. When the time came, one stick member collapsed and refused to jump, leaving three other stick members, including Cpt Kessel stranded onboard. The aircraft had already suffered some damage and the airmen declined to return to the DZ on Lippy's request and eventually returned to their base. The soldier who declined was promptly put on a charge with the Military Police, but Lippy and other stick members were unable to fly out again and subsequently missed the Operation.

After seeing service in Italy he returned with the rest of the 1st Airborne Division to England hoping to take part in the Allied invasion of Europe. The Division was passed over for a role in the initial invasion but took part in Operation Market Garden in September 1944.

Here the plan was for 16 Parachute Field Ambulance to be based in a Dutch hospital - St Elisabeth’s in western Arnhem, located about a mile from the ultimate objective of the Arnhem road bridge. After landing on DZ X on the afternoon of 17 September 1944, Lippy and the rest of 16 PFA moved to Arnhem at the back of the 2nd Parachute Battalion snake on Lion route.

By the late evening the unit had arrived at the Dutch hospital and were offered the use of wards and operating theatres. It is probable there were already some wounded awaiting their arrival, and Lippy’s team took the first shift and worked all night, being relieved by Major Longland’s team the next morning. It was on this day (18 Sept) that the hospital was overrun by the Germans and most of 16 PFA was marched off into captivity. However, the two surgical teams and some others were allowed to stay.

Lippy remained at the St Elisabeth’s until 13 October when he and the rest of his team and patients were transferred to Apeldoorn. He did not stay here long, escaping on 16th October. The story of his escapades was told in his book Surgeon at Arms (1958, 1st Edition). He reached Allied lines in February 1945.

Lippy is perhaps best remembered for operating on and probably saving the life of Brigadier 'Shan' Hackett.

When Brigadier Hackett was brought into St Elizabeth’s Hospital, Captain Kessel was in reception and made him lie on a table so he could examine his wounds. Hackett complained of a blow to his solar plexus which made his stomach muscles weak, sore and painful. Upon examination the severity of his wounds were discovered. A German medical officer was prowling around and suggested to Lippy Kessel that in his opinion the casualty was a member of the ‘Bauchschuss oder Kopfschuss – Spritzen’ club. Basically this meant in the case of a belly wound or head wound, give a morphia injection, the recipe for a quick death.

Kessel said he would give it a go and operated. He and his surgical team removed a splinter around two inches square which had cut twelve perforations and two sections in Hackett's lower intestine. He was later to write that he ‘owed forty years of his life to Lipmann-Kessel’. In fact it turned out to be fifty-seven).

Hackett was initially booked in as Corporal Hayter and was one of the longer staying patients at St Elizabeth’s. Hackett spent around two weeks in the hospital recovering from his wounds. However, it was eventually decided it would be necessary to try to assist his escape. Aided by a Dutch Resistance worker named ‘Piet van Arnhem’ Hackett was quite brazenly walked out of the Hospital to a Red Cross car outside, dressed as a civilian. Despite being severely weak after the surgery he was walked and half-carried from the Hospital. He was given a Medical Card detailed his injuries and treatment and escape supplies which had been collected by Father McGowan, the Padre of 16 PFA. With the escape a miraculous success, a new patient was soon moved into the same bed. 16 PFA staff were perfectly aware however, that if any Germans asked after Cpl Hayter, they could say with some assurance and pride that no such person existed.

Brig Hackett later reported that whilst in hiding in Holland, a Dutch doctor examined his stomach wound and saw Lipmann-Kessel's work. The doctor was full of admiration for this surgical miracle and did not fail to let Hackett know that, by rights, he ought to be dead. It can be regarded a fine example of the work of the RAMC in carrying out brilliant surgery in an unpromising situation.

Lippy was awarded a MBE and MC for his actions at Arnhem. In 1945 he was promoted to Major and led a surgical team at Belsen concentration camp. Demobbed soon afterwards he resumed his civilian medical career and eventually became a Professor. He died in June 1986 and is buried in the civilian cemetery at Oosterbeek - close to the CWGC cemetery and his headstone bears a Pegasus badge. 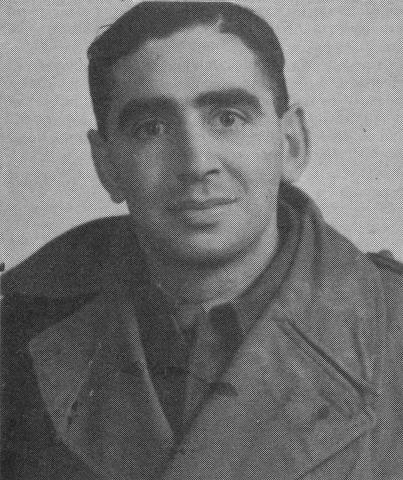