Lionel Herbert John Brown was born in October 1908 and was the son of John William and Louisa Blanche Brown.

After initial service with the Royal Armoured Corps, he volunteered for Britain’s Airborne Forces in early 1942 and after completing the selection process at Hardwick Hall he was sent on parachute course No 8, at R.A.F. Ringway, 10th – 24th February 1942. He completed the two balloon and five aircraft descents to qualify as a parachutist in the 1st Parachute Battalion.

Private Brown was assigned to 2 Platoon, ‘R’ Company and went to North Africa with them in November 1942. It is not certain when he was taken prisoner, but it was probably on the parachute operation in Sicily in July 1943. He placed in a Prisoner Of War Camp in Italy, Number 70.

He was being transported on the 10th March 1944 with two other soldiers of the 1st Battalion, The Buffs (Royal East Kent Regiment), Privates Daniel Hollingsworth and Thomas William White, and Sergeant Mario Mootes, an Italian soldier, when they reached Ponte Del Diavolo the Germans stopped the lorry and shot them all.  Private Brown died at the age of 35.

The soldiers were originally buried as unknowns in a local cemetery and then transferred to Ancona Military War Cemetery. They have now been been identified and when the graves are re-dedicated, Pte Brown will lay at rest in Ancona War Cemetery, II. K.6.

NOTE: Pte Brown is currently commemorated by the Commonwealth War Graves Commission on Panel 12 of the Cassino Memorial; his name will be removed when the panel is next replaced. 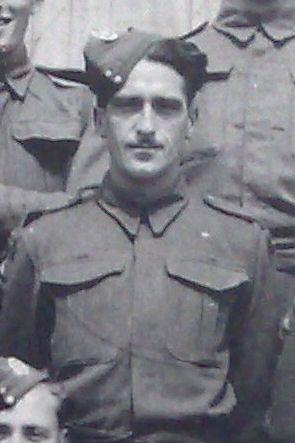