Lionel Ernest Queripel was born on the 13 July 1920 at Winterbourne Monkton in Dorset.  Having moved with his parents to Tunbridge Wells, he returned to Dorset for schooling, attending Durnford Prep School before attending Marlborough College.  Whilst at Marlborough he represented his house at boxing and rugby, as well as excelling in the Officer Training Corps.

He was admitted to the Royal Military College, Sandhurst on the 27 January 1939, becoming the fourth generation of his family to join the military, with a family history dating back to the Crimea. In October 1939, he completed his training and commissioned into the Royal Sussex Regiment.  .

Whilst serving in the Middle East in December 1942, the 2nd Royal Sussex Regiment was converted to become the 10th Battalion, The Parachute Regiment.  Lt. Queripel was one of those who volunteered, undertaking his parachute training in the Middle East before being promoted to Captain in A Company.  Capt Queripel was involved in fighting in Italy in his role as 2IC, A Company before returning to the UK at the end of 1943.  In February 1944, he attended a Company Commanders Course at the School of Infantry in Durham.

On 18 September, Captain Queripel emplaned with other members of 10th Para Bn for Arnhem.  By 19 September, he was commanding a composite company composed of three Parachute Battalions when it became split and pinned down by continuous and heavy enemy fire. Despite wounds to his face, he carried an injured Sergeant to the Regimental Aid Post and, ignoring enemy fire, returned to reorganise his force. He then destroyed two enemy machine guns and captured an anti-tank gun. Later, although wounded in both arms, he inspired his men to beat off all attacks with grenades, pistols and rifles.

The enemy pressure continued and Captain Queripel ordered is men to withdraw. He stayed behind to cover their withdrawal with his pistol and some hand-grenades. This was the last occasion on which he was seen.

During the whole period of nine hours of confused and bitter fighting Captain Queripel displayed the highest standard of gallantry under most difficult and trying circumstances. His courage, leadership and devotion to duty were magnificent and an inspiration to all.

Sgt L Read paid tribute to him in ‘The Tenth’ by R Brammall:

“He was one of the finest men I was privileged to serve under - always the last officer to return to his mess.  His first thought was for his men…..One hears of V.C.’s being given for impulsive bravery, but not Capt. Queripel.  Anyone who knew him would have expected him to do just what he did.”

He died on the 19th September, aged 24 years old and is now buried at Oosterbeek War Cemetery.  In January 1945, he was posthumously awarded the Victoria Cross.  His medals, along with his Fathers, Grandfathers and Great-Grandfathers were presented to the Airborne Forces Museum by Captain Queripel mother and sisters in 1972. 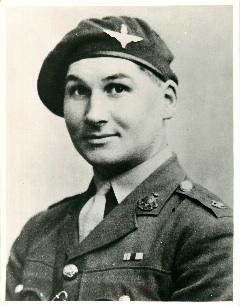