He initially served with 11 Platoon, C Company, 156 Parachute Battalion but was later transferred to 9 Platoon.

Pte Kemp took part in the Battle of Arnhem, during Operation Market Garden, in September 1944. He was wounded on 20 September, the day before his birthday, and was later captured during the battle and became a prisoner of war.

When Pte Kemp was repatriated to England after 156 Parachute Battalion had be disbanded, he was posted to The 1st Battalion The Parachute Regiment.

‘Lew’ continued to jump for charities such as Wizz Kids and McMillian Cancer Support, often with The Red Devils. His last jump was a tandem jump into Arnhem strapped to a Dutch soldier when he was 71 years old.

Only a few weeks previous he had been in fine form and enjoyed spending a day with the schoolchildren of Somerby School, talking to them about the events in their village 70 years ago, concerning the preparations and aftermath of Operation Market Garden.

I was born in a Leicestershire Village September 1924, left school at 14 years of age, no qualifications, and started work on a poultry farm 10 shillings, i.e. 50p a week. 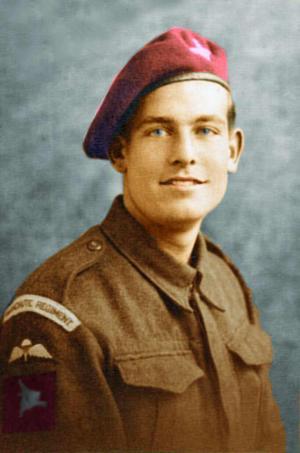