He volunteered for airborne forces shortly after he was enlisted into The Royal Berkshire Regiment.

He qualified as a military parachutist on Course 99 which ran at RAF Ringway from 19 January to 3 February 1944 and was initially posted to No 1 Airborne Forces Holding Unit until an eventual posting to No 6 Platoon, S Company, 1st Parachute Battalion.

He deployed with the battalion for the divisional airborne assault to capture the Rhine crossings at Arnhem, as part of Operation Market Garden, and parachuted onto DZ-X on Sunday 17 September 1944.

Initially the battalion attempted to take its planned route to the Amsterdamseweg, but encountered a German armoured patrol North of Wolfheze, engaging the lead company (R Coy).

Abandoning the original objective, the battalion’s commanding officer Lt Col Dobie decided to head towards the bridge. He left R Coy engaged with the enemy and took the remainder of the battalion, including S Coy, on a south easterly route towards the outskirts of Arnhem.

Pte Dyer was killed as the battalion made its way to the Western outskirts of Arnhem. The circumstances of his death are not exactly known and he has no known grave.

Pte Dyer died on Monday 18 September 1944, aged 19 years, and is now commemorated on Panel 9  of the Groesbeek Memorial. 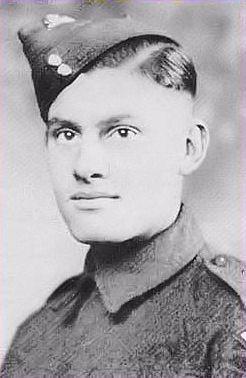