Leslie "Cyril" Tasker joined the army on 16 April 1942. Despite having a full license already, Cyril was sent to undertake driver training in Carlisle. After this, he was posted to Northern Ireland in September 1942, where he delivered rations and stores to Belfast and Londonderry.

In April 1944, Driver Tasker was posted to Salisbury to train in preparation for D-Day.

On the 3rd June 1944 the men of 716 Coy RASC were placed into three ton lorries with the side and rear curtains closed tightly so they did not know where they were going. They ended up at a field near Portsmouth which was full of gliders.

Dvr Tasker took off on the 6th June 1944 towed by a Halifax, cast off 15 miles out to sea released at about 6300 feet. The glider landed at Ramillee near Pegasus Bridge. They dug in for the night digging slit trenches where they landed in all round defence. After offloading one of the jeeps he set off with three other lads to drop off supplies to other units.

“On my travels, I saw one of our lads cross a lovely lawn of a bungalow, whilst we were being shelled. We immediately got off the land rover to take cover, but before I knew it someone pushed me in the ditch next to the house. The man asked me if I had ever been fired at before, and I told him I hadn’t. That man was General Gale, who said he could hear a mortar coming from miles away, and he was right. Exactly where I had been standing before I had been knocked off my feet the mortar landed. Had he not dragged me into the trench I wouldn’t be here today”

“Years later at an event in Ranville called “Poppies for Westminster” 1954, I saw General Gale again with Montgomery, he asked me who I was, as my face was familiar, I told him he had saved my life one night when he had pushed me into a ditch whilst being mortared. Both General Gale and Montgomery went away laughing.”

Near to Pegasus Bridge, Cyril was responsible for converting a farm building into an ammo dump, and then using their jeeps to collect the ammo the RAF dropped for them in the area. The Germans were constantly shelling the location and he remembers being there for about 3 months and it was then that he connected with the 9th Battalion.

He drove supplies to Merville Battery and met up with Lt Colonel Ottway. It was on their return that the ammo dump had taken a direct hit, and he set about rebuilding a new one to safely store the ammo and other much needed equipment.

Cyril remembers on one occasion out on his deliveries bumping into a lone German soldier:

“It was clear the soldier didn’t want to be there anymore, told me his life story, shook my hands and walked off, not really caring had I shot and killed him. He never looked back.”

On the 24th December 1944 he moved to the Ardennes. Cyril remembers, whilst relaxing one evening in a church hall, one of the lads who knew we had to be back by 10pm, banged his Sten Gun butt on the floor in disgust, and the Sten went off, with a round passing through his lower jaw and into his head, it had killed him instantly.

His unit then moved to Belgium and then Holland.

In early 1945, they made their way up to the Baltic where they liaised with the Russians who were dancing in the streets, but would not let the British lads go to their side of the street.

The unit were kitted out for Japan, but as the Atomic bomb was dropped, his unit were sent to Palestine instead arriving late in 1945.

Cyril demobbed in May of 1947 as a Sergeant.

He went onto drive lorries for Alan West Haulage of Lewes Road, Brighton. He married Jeanne nee Lazenby on the 14th of June 1947 at Woodingdene, near Brighton.

The couple celebrated Jeanne’s birthday in Normandy on the 7th June 2017. They will also be celebrating their 70th wedding Anniversary on the 14th of June 2017.

By Sam Stead with information courtesy of Gil Boyd 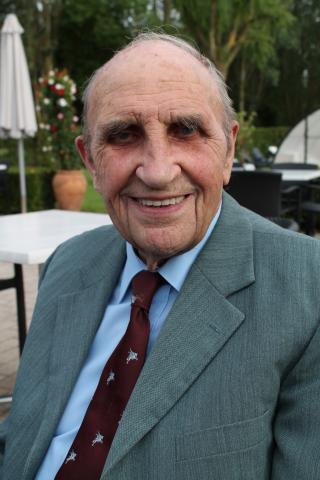