Leslie Thomas Sanders joined the Army in early 1940 and served with the Royal Army Medical Corps. He later volunteered for airborne forces and was posted to the Glider Pilot Regiment in March 1942.

By 1944 he was a Staff Sergeant and had trained on the larger Hamilcar glider, flown by pilots of C Squadron. On 6 June 1944 he took part in Operation Mallard, the reinforcement lift at 21.00 hours for the 6th Airborne Division. He flew a Hamilcar glider, along with Sergeant LW Holder, carrying men and equipment of the 6th Airborne Armoured Reconnaissance Regiment to Landing Zone N near Ranville in Normandy. He was withdrawn back to the UK within 48 hours, along with the majority of the other glider pilots.

S/Sgt Sanders was a member of the stand-by crews for Operation Market Garden, tasked to fly in extra equipment for a US Aviation Engineer Unit, but in the end he was not used.

He was deployed for just under a week into Greece for the launch of Operation Manna in October 1944.

On 24 March 1945 he took part in Operation Varsity, the 6th Airborne Division’s landing on the east bank of the Rhine in Germany.

S/Sgt Sanders was discharged in November 1945 after serving 5 years and 262 days. 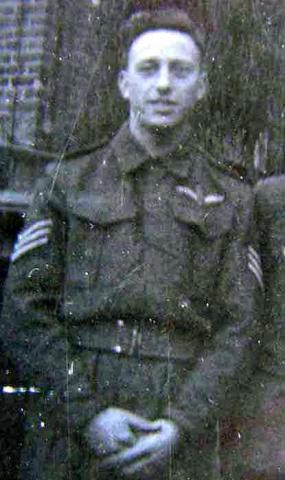