Corporal Les Banks served with the 3-inch Mortar Platoon, 1st Battalion, The Parachute Regiment (1 PARA) between 1955-58. During his Airborne service he took part in the Battalion deployments to Suez and Cyprus.

He recalls a house observation by 3-inch Mortar platoon soldiers in Cyprus:

"In about June 1956, whilst seeking out EOKA, we were instructed to carry out a observation in a house, the house being in the 'Murder Mile' of Nicasia where it was believed that EOKA held meetings.

Seven of us set off under the Command of Captain Murray-Bligh, our Platoon Commander. We were ordered to carry everything in our smocks which ended up bulging with food and equipment to carry us over for the weekend.

We went into the house, mixed up with members of the South Staffs (about 30 troops all told), as a cover so we would [not be noticed failing to leave the house with the rest of] them. A Nicosia police inspector also came in with us. Inside he broke a seal on a very small room and we hid in there until every one had left. We then came out of the room and the police inspector re-sealed the room we had been hiding in.

We set out our observation hours and which of the downstair rooms to lay in wait for the EOKA to enter the house, either by the front or back (at the back entrance it went straight into the house as there was no door to pass through). The whole of the weekend passed without any sign of the EOKA terrorists appearing.

Those who were on the observation duty under the command of Captain Murray-Bligh, were W. Whiley, M. Hayes, R. Escott, J. Smith, J. Walker, T. Brooks, L. Banks. All from the 3-inch Mortar Pln." 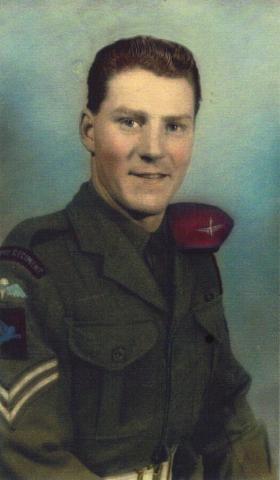