Corporal Leslie Alfred Nash was the son of Leslie John and Elsie Eliza Nash, of Willesden, Middlesex. It appears he enlisted into the RASC and volunteered for the airborne forces within the first year of No 1 Parachute Brigade's formation. He attended No 15 course of elementary parachute training which ran at RAF Ringway from 8 to 16 June 1942.

The course cadre comprised of 119 men, including 13 officers, and it is noted that only 2 injuries out of 760 descents occurred, indicating a high standard was achieved. Driver Nash completed 2 balloon descents and 5 aircraft descents from converted Whitley bombers to qualify as a military parachutist.

He served with the 1st Parachute Battalion and it is likely that he was sent to North Africa as a battalion reinforcement during Operation Torch. Thereafter the battalion fought in Sicily and Italy, probing as far north as Foggia before being withdrawn back to the UK in preparation for D-Day and was based at Grimsthorpe Castle in Lincolnshire. He was known as 'Jimmy' by other men in the battalion.

A frustrating period ensued with 16 cancelled operations. The Battalion was finally deployed in Operation Market Garden as part of 1st Airborne Division's assault to seize the Rhine crossings at Arnhem. By this time 'Jimmy' Nash had been promoted to Corporal and was 2i/c of a section in No 3 Platoon R Company, commanded by Major John Timothy.

On the morning of Sunday 17 September the 1st Battalion left Grimsthorpe Castle for Barkston Heath airfield near Grantham. They were transported to the drop zone, DZ X, by the 61st Troop Carrier Group of the United States Air Force.

The 1st Battalion, including 'Jimmy' Nash,  moved off from the DZ on Sunday afternoon. By 16.00 hours they had reached Wolfheze railway station where they met the officer commanding the Reconnaissance Squadron who advised the battalion's commanding officer, Lt Col David Dobie, that enemy infantry were blocking the intended route to the east into Arnhem. Lt Col Dobie made the decision to drop the original planned route  in favour of the Wolfhezerweg which ran north to join directly with the Amsterdamseweg.

R Company formed the spearhead for the battalion as they moved north of Wolfheze up this road. At approximately 16:30 hours as they moved towards the crossroads in wooded country they came under fire from an armoured patrol of the 9th Hohenstaufen SS Panzer Division. R Company entered into a sustained firefight with the enemy to enable the remainder of the battalion to advance. In doing so it sustained 50% casualties and was unable to move forward to rejoin the battalion. Two runners were sent to communicate with the battalion HQ as the radio sets were not working. Corporal Nash was one of the runners and was killed when he encountered an enemy patrol. 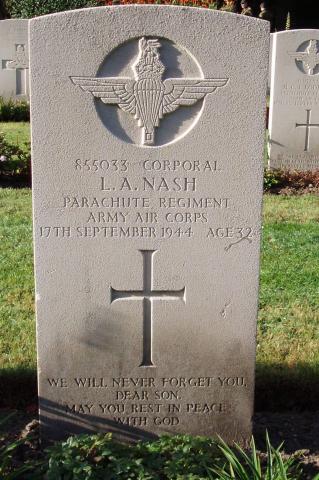