Major Leslie J “Paddy” Deacon was awarded a Military Cross in 1943 in the Italian campaign while serving with the Parachute Regiment.

In December 1943 Deacon was serving with the 4th Bn Parachute Regiment. Shortly after the battalion arrived in Cásoli, in the Abruzzo region, Deacon moved his platoon to the nearby village of Palombaro.

A German NCO was captured and interrogated, and acting on the information gained from Italian partisans, an enemy position was identified. Deacon led his men in a night attack up the Maiella Massif, but they were delayed by the rugged terrain and the assault was made in daylight.

Advancing up the steep slope through intense machine-gun fire, they took five prisoners – members of the 98th Mountain Regiment – killed one of the defenders and captured two machine guns. The platoon held the position for seven days until it was relieved.

A few weeks later, Deacon was leading a reconnaissance patrol when they came under machine gun and mortar fire in open country and suffered seven casualties. Deacon led a fighting withdrawal and supervised the successful evacuation of all the wounded under heavy fire. He was awarded an Immediate MC.

Leslie John Deacon was born at Bridgnorth, Shropshire, on March 27 1921. Always known as Paddy, he was educated at the John Fisher School, Purley, south London. On leaving school, he joined a typographical company in Fleet Street as a management trainee.

Jack Hobbs, the Surrey and England cricketer, who had a sports shop in Fleet Street, suggested that, with the outbreak of war threatening, he should join up. In 1938 he joined the London Irish Rifles as a private soldier. At weekend training camps, his companions included the actor, David Niven, and Britain’s future prime minister, Anthony Eden. While training at Ramsgate, he put to sea in a pleasure boat with two comrades and, armed with a Bren gun, helped in the evacuation from Dunkirk.

After a posting to Gibraltar with the 8th Irish Bn The King’s Liverpool Regiment, he joined an officer training unit and, in 1942, he was commissioned into the Royal Irish Fusiliers (RIF). He requested a secondment to the Parachute Regiment and for the rest of the war served with 4 Parachute Battalion.

After the Italian campaign, Deacon parachuted into southern France as part of Operation Dragoon. He then saw action in Greece, where he was responsible for a prison in Athens. Greek collaborators were being held there and the prison came under attacks from Greek partisans and civilians.

After the war he served in Palestine on internal security duties. A staff appointment in Northern Ireland was followed by a return to the RIF. He saw active service in the Sinai Desert, followed by postings to Gibraltar, Germany, Kenya and Korea.

In 1956, he returned with the RIF to Kenya and, during a nine-month tour in the Great Rift Valley, he commanded the Forest Company in continuous operations against the Mau Mau in the Aberdares. He was appointed MBE at the end of his tour.

After retiring from the Army, Deacon remained in Kenya. He served with the Kenya Regiment for seven years and was made second-in-command. He then joined the East African Power and Lighting Company in Nairobi, one of the region’s largest employers. He established a training school and played a notable part in the company’s development as Kenya moved toward independence.

In 1974 he became a consultant with a personnel recruitment and training company and was one of the founders of the Federation of Kenya Employers. After Kenya’s independence, among other appointments, he served for six years on the Industrial Court, was a governor of the Kenya Polytechnic, chairman of Coates Brothers East Africa and a board member of Securicor (Kenya).

He was also chairman and commandant of the Royal British Legion and helped to transform the Duke of Edinburgh’s Award scheme, established in Kenya in the late 1950s, to what today is known as the President’s Award. He retained his links with Ireland and was chairman of the Kenya Irish Society.

Horse racing was a great interest. He was a board member of the Kenya Jockey Club and, at one time, owned three horses. As a young man, he played soccer with Carshalton FC and boxed with the Times Amateur Boxing Club.

In 2013, at a ceremony attended by the President of the Italian Senate, the Mayor of Cásoli and representatives of the 4th Battalion The Parachute Regiment, Deacon was awarded the honorary citizenship of Cásoli and a plaque recording his courageous actions was unveiled in the town square.

Paddy Deacon married, in 1946, Barbara (Bar) Winifred Parker, who was serving with the WRAF at the time. She died in 2016 aged 101 and he is survived by their two daughters. Their son also predeceased him. 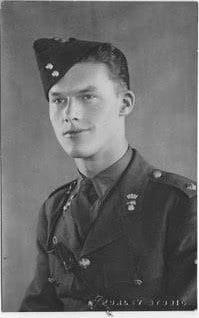