“I was called up on the 4th April 1943, General Service at Budbrook Barracks, Warwick. We had adaptability tests, day and night patrolling, drill and slit-trench digging. We did range work, field cooking, crawling under barbed wire, with a Bren gun firing over our heads on fixed lines, route marches and cross country runs.

On the 16th December 1943 I went to The Devonshires Regiment in Northampton. The same sort of things as at Warwick, but with Section attacks, 25 mile marches, and day and night field firing.”

At some stage early in 1944 he volunteered for Airborne Forces.

“On the 29th March 1944 I went to Hardwick Hall for two weeks (for what is now known as P-Company), when that finished I was sent on parachute course 113 [RAF Ringway, 24 April – 07 May 1944]. I did eight jumps, two from a balloon and six from a Wellington, and then onto the Pass Out Parade.

From there I was sent to Clay Cross, the Reserve Depot, for three weeks. Then onto Tilshead and joined the Rear Party of the 8th Battalion and did a 3” Mortar Course.

On the 9th August we moved to a Transit Camp at Southampton. On the evening of the 10th August we left Southampton on the King Leopold, arriving France on the morning of the 11th August, and then joined the 8th Battalion at Herouvillete. A week later we started the advance to the Seine.

In September we returned to England and moved from Tilshead to Neston. The Mortars did some range firing and some night patrolling, and some [personal] weapon firing.

We had Xmas Dinner on 23rd December 1944, and then on the 24th we moved to Dover Castle for one night. On Xmas day we crossed the channel to Calais, and then into open trucks and moved to Anhee on the River Meuse in Belgium.

On the 27th December we moved to Houyet, and then advanced to the Rochefort area.”

After the German Forces had been pushed back from Belgium, almost to their original start lines for the Ardennes offensive, the 6th Airborne Division was moved to Holland.

“On the 20th January 1945 we moved by road to Holland, to Kessel. My Mortar Section was attached to ‘A’ Company at the village of Barrlo on the River Maas. They then proceeded to fire a large concentration across the river onto the enemy positions." [This is probably the ‘small scale shoot’ mentioned in the War Diary, 13 February 1945]

“At the end of January we went to Ghent for one night, then by plane to England at Newbury, then back to Tilshead”. [Note: This move took place on the 20 – 24 February 1945]

“We had more training and a rehearsal drop at Wittenham Clumps, just south of Oxford for the Crossing of the Rhine operation. We then moved to the area around Epping and took off from Chipping Ongar at 07.00 hours [24 March 1945]. We dropped at Hamminkeln at 09.45 hours on Drop Zone ‘A’. I was one of the men detailed to clear the D.Z. afterwards, and helped to bring in the dead of our battalion. On the 27th March I re-joined the battalion at Rhade for the advance across Germany.

At Gross Reiten I received a slight wound, and spent one night in a Field Hospital, then back to the battalion at Dulmed. We then advanced to Greven and the Dortmund Em Canal. Then onto Osnabruck, with me attached to ‘A’ Company as a Radio Operator. At Bad Oeynhausen ‘A’ Company went to the Mittelland Canal to guard the flank of the rest of the 3rd Parachute Brigade, as they went on to capture Minden. The battalion then moved forward to Friedenwalde. We then crossed the River Weser at Petershagen, and then by canal footpath to Wunsdorf.

Crossed the River Leine at Holstorf, then crossed the Hmamburg to Hanover autobahn at Mellendorf, across the Burgwede to Celle, and then on to Hermannsburg. At this stage I was moved from the Mortar Platoon to ‘A’ Company as a Sniper. We now crossed the area of Luneburger Heide to Dahlenburg, and then onto Ratzlingen, all on foot. On the 2nd May we went to Wismar on tanks”.

The battalion spent two weeks in the Wismar area, before moving back to the area of Luneberg Heath, prior to the move back to UK.

“We returned to Tilshead by air [via Newbury, and Brussels] and then in late September I went to Palestine, on the Aircraft Carrier HMS Warrior, onto Haifa, and then to Gaza for four weeks. I then moved to Tel Aviv, to the football pitch in the Palestinian Police Camp at Sarona, where we carried out cordon and search operations, day and night patrols, accompanied by the Palestinian Police. Here I was promoted to Corporal.

We flew to Habbaniya in Iraq on an exercise with the Iraqi Levies and then carried out a long march back across the desert to Palestine. We then moved to Quastina in a Brigade Camp in 1946. ‘A’ Company did a parachute drop onto Khartoum airport and had eleven casualties, including one killed, because the wind was too high. We marched out to Omdurman, and then flew back to Palestine. We then moved to Athlit Camp near Haifa. Here we carried out a lot of road blocks, both night and day, guarding docks, banks and the Haifa oil refinery and the railway.

This was not the end of Len’s service.

“I re-joined the Devonshire Regiment on the 18th November 1947 and remained with them at Bulford Camp until the 14th February 1948, when I went to Aldershot and the Parachute Regiment Depot for ‘P’ Company. Once I had passed that it was onto Upper Heyford for a parachute course, where I did two jumps from a balloon and then six from a DC 47 (Dakota), and then back to the Depot.

I joined the 4th/6th Battalion in Lubecke, which soon after was renamed the 1st Battalion, part of the 16th Independent Parachute Brigade. We moved by road to Garfenwer, with an overnight stop at Frankfurt. Here we went on exercise to southern Germany with the Americans. On the way back from this we had an overnight stop at Paderborn, then a marched to Sennestadt, then by truck to Braunswick. We stayed in Germany until the 10th November 1949 and then moved back to Aldershot, where we carried out a lot of exercises.

I was moved to the Rations Store until the 3rd June 1951, when we went to Cyprus on exercise. A lot of marching, from Nicosia to Kyrenia and bivouacking in the Troodos Mountains. We then moved to Egypt until on the 9th January 1953 I returned home for my final discharge from the Army”.

Len attended the 70th Anniversary Commemorations in Belgium and Germany in March 2015. He then visited the Airborne Assault Museum at Duxford on Thursday, 25 June 2015. 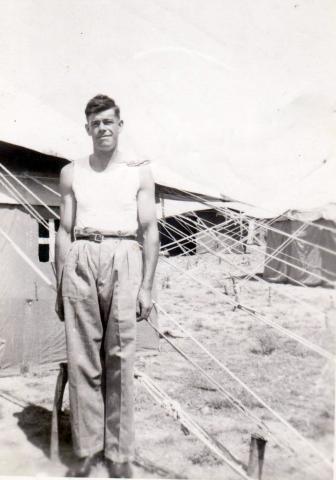