I joined the Army cadets, 145 PARA ACF in New Addington (Surrey), in about 1972 and left having achieved the rank of L/Cpl.

Most of my time was served with 3 PARA, starting in a rifle section (Section Commander Cpl K McCarthy KIA Mount Longdon 1982). As 'Joe Crow' you always got a bit of the heavy kit and I got the 84mm 'Charlie G', until the radio operator fell on his head during a night tank stalk in Germany, then I got promoted to radio operator; the radio kit was heavier than the 84!

As  I showed I could use it I ended up on a signals course, and was eventually taken into the Signal Platoon, where I stayed for the remainder of my service.  I completed various signals and infantry courses (Battalion tactics cadre with Cpl McKay, later Sgt VC, KIA Mount Longdon 1982) ending up as Corporal (Local Sergeant on SNCO course).

In the Falklands I commanded a Rebroad cast station as a Private in charge of two L/Cpls from the Royal Signals for 11 days and survived two Blue on Blue contacts, before joining A Coy Sigs Det for the Battle of Mount Longdon, my Detachment Commander Cpl S Hope was KIA, resulting in my promotion to L/Cpl. 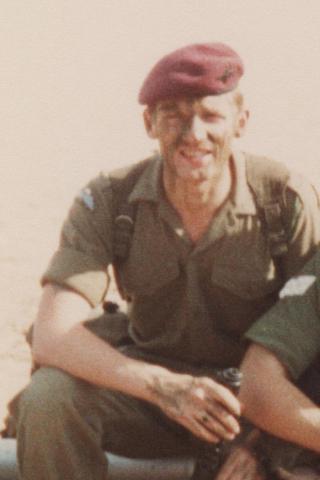