Lennard Withers was born at Croydon on 30 July 1921 and educated at St Dunstan’s College, Catford. He joined up soon after the beginning of the Second World War and, in June 1940, was posted to the Royal Sussex Regiment.

He was in a young soldiers’ battalion guarding Ford Airfield, Sussex, when they were attacked by Stuka dive bombers. Unable to get to an air raid shelter, he survived the raid by sheltering in a shallow ditch. Only two of the buildings remained standing and there were many casualties.

Withers was subsequently commissioned into the Northamptonshire Regiment and, having volunteered for the Airborne Forces, was transferred to 2 SSR. In spring 1943 he accompanied the battalion to North Africa to train for the invasion of Sicily.

Early on the morning of July 9 1943, Withers, a lieutenant serving with 2nd Battalion the South Staffordshire Regiment (2 SSR), lifted off in a glider on the flight to Sicily. He was part of a coup de main group ordered to attack and capture the Ponte Grande Bridge (code-named Waterloo Bridge) near Syracuse. They were then to hold it until relieved by the main invasion force, which would land by sea several hours later.

Strong winds rose quickly and visibility was poor. Many of the tug pilots, new to this work, became lost; and their gliders, released too soon, came down in the choppy sea. Eight gliders had been allocated for the attack, but that carrying Withers was the only one to reach the target; it landed south of the bridge shortly before 11pm.

Withers decided that he and his men would attempt to capture the Ponte Grande, the main objective of the 1st Airlanding Brigade, by themselves. He swam the canal with five men and attacked a pillbox on the north bank in order to draw the enemy’s fire, while the remainder of his platoon attacked the bridge from the south.

The defenders were driven off with grenades. Withers then removed the demolition charges and cut the telephone wires, thus ensuring that the bridge could not be blown. He and his men held the bridge against determined enemy counter-attacks.

When reinforcements arrived the next morning, the group assisted in the defence of the bridge until 4pm, by which time there were heavy losses. Withers was awarded an Military Cross (MC), the citation stating that his resourcefulness and courage had contributed largely to the early capture of Syracuse.

After the Sicily campaign, he saw further action in southern Italy before returning to England in November.

In September 1944 he took part in Operation Market Garden, the glider-borne assault at Arnhem. After being in action continuously for 10 days, most of the men under his command had been killed. Ordered to withdraw, he reached the Rhine at daybreak but the rescue boats had ceased to operate and he swam across. On arriving back in Britain, his first duty as the newly appointed adjutant was to obtain a report of those killed, wounded, missing or taken prisoner. From an initial strength of 54 officers and 988 other ranks, there remained six officers and 120 other ranks.

In the final days of the war in north-west Europe, Withers flew to Norway. Many of the German occupying force were still carrying arms, and he spent four months working with members of the Norwegian Resistance to sort out the situation.

After a spell in Belgium and Germany, in 1946 he was demobilised. He then spent more than 40 years with the Marley Tile Company, working on the research and development of many new products.

In retirement Lennard Withers settled in Kent. He married, in 1945, Patricia Birchall-White with whom he had a daughter and two sons.

Photograph and article courtesy of The Telegraph 18 January 2015. 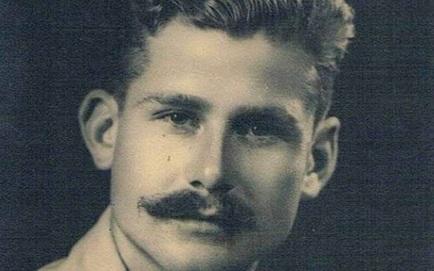