Lawrence Hanlon enlisted in to the Royal Engineers in May 1939, when still only 17 ½ years of age.

He served in North Africa from the 16 July 1943 to the 16 March 1944, during which time he volunteered for the Special Air Service.

By 1944 he was a member of the 2nd SAS Regiment, but was RTU’d back to the Engineers for being late on parade after a week-end leave.

He was posted to the 4th Parachute Squadron, RE on the 21 August 1944. This was after having completed parachute course No 128, at RAF Ringway, 6 to 21 August 1944. His Parachute Instructors comments: “Good performer – very good spirit”.

He escaped under the ‘culvert’ on the 19 September from the north side of the railway to the south and moved to the area of Ommershof house, and was dug-in there by the 20, and fought on, until the withdrawal was ordered on the 25 September.

Sapper. Hanlon was taken prisoner on the 26 September after attempting to cross the river the night before. When all the boats had stopped he waded into the river, but realized he did not have the strength to swim across.

He was liberated by the American Army whilst at the ‘Work Kommando’ Camp at Zwickau, on the 23 April 1945. He and his three mates, ‘Stan’ Holden, Dvr. Scarfe and ‘Clack’ Jock set off on their own to get back to England, see account by ‘Stan’ Holden.

He was discharged from Regular Army Service, after nearly ten years’ service on the 21 February 1949, but re-enlisted into the Territorial Army, at Bradford the next day, continuing to serve in the Royal Engineers.

He eventually completed his 22 years service on the 6 November 1971, with a unit of the Territorial and Army Volunteer Reserves, at Brighton.

Lawrence and his wife took part in a battlefield tour of the Renkum-Wofheze-Oosterbeek-Arnhem area in March/April 2007.

Created with imagery and research kindly supplied by R Hilton 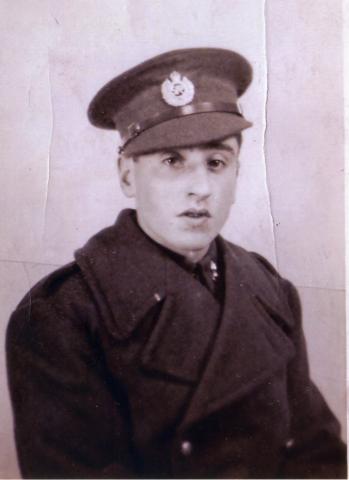