Lance Corporal Lawrence Henry Chubb was the son of Alfred C. H. Chubb, and of Edith A. R. Chubb, of Barking, Essex. He served in the 12th (Airborne) Battalion, The Devonshire Regiment.

A shortage of aircraft meant that only one Company could be inserted by glider, with the remainder travelling by sea. The Battalion formed up in the Ranville area on 7 June and took up defensive positions occupied by the 12th Parachute Battalion around 17:00 hours. Later that evening the Battalion positions were subjected to enemy mortar and machine gun fire. Their positions were then also attacked by enemy aircraft with anti-personnel bombs. Lance Corporal Chubb is one of three soldiers believed to have been killed during these attacks. 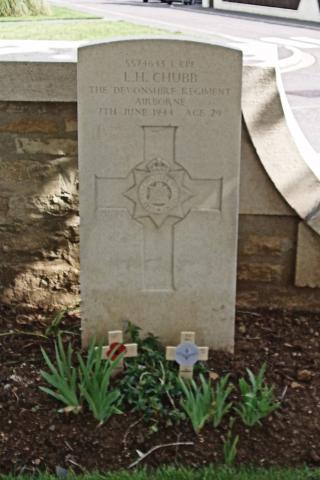