Larry Ansell enlisted into The Royal Berkshire Regiment and later volunteered for airborne forces in World War II while he was a corporal.

He qualified as a military parachutist on Course 63 which ran at RAF Ringway from 4 to 17 May 1943. The course instructors' notes record that Larry was "conscientious and a hard worker. An excellent performer."

Larry was later promoted to sergeant and by September 1944 was serving as commander of No 8 Section in 6 Platoon, B Company, 2nd Parachute Battalion.

He jumped with the Battalion as part of the 1st Airborne Division's assault to capture the Rhine Crossings at Arnhem during Operation Market Garden on 17 September 1944.

Larry was photographed by Sem Presser, a press cameraman, on the Monday after they had landed, having just captured a German soldier. The image later became well known and features prominently in the exhibition at the Hartenstein Museum.

After days of fighting at the bridge, Larry was eventually captured and  later held as a POW in Germany. 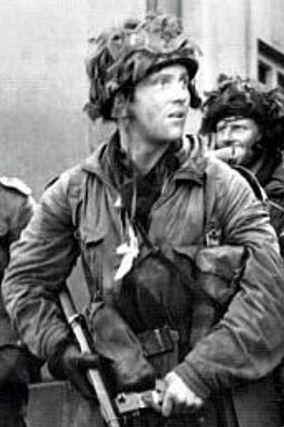