Lancelot George Rooke (known as Paddy or Lance) joined the Royal Irish Fusiliers on 12 October 1942 at the age of 16, lying about his date of birth to be able to enlist.

In 1943 he volunteered for the Airborne Forces and was posted to the 1st Battalion The Royal Ulster Rifles, joining A-Company. He went on to be posted to 6th Airborne Divisional HQ Defence Platoon.

He saw service in Normandy (where he spent a lot of his time in and around the quarry that was Divisional HQ next to D.Z. ‘N’ on defence duties), Ardennes, Rhine Crossing and the pursuit across Germany.

He completed a parachute course in November 1944 and transferred for a year to The Parachute Regiment, before rejoining the 6th Airborne Div HQ Defence Platoon for his final service in Palestine, where he was demobbed in May 1947.

Most of the time that he was in the Defence Platoon he acted as part of the close protection section to the Divisional Commander. ‘Lance’ recalled that the Defence Platoon was more like a mini-Company for the Normandy and Rhine Crossing operations with a strength of approximately 60 men. For the impending operations in the Far East it was increased to a full-Company size and this is what they took to Palestine.

‘Lance’ landed, successfully, on L.Z. ‘P’ on the 24 March 1945 and moved to Kopenhof Farm as part of the plan to protect this location which was to be used by Major-General Eric Bols as the Headquarters for the 6th Airborne Division on Operation Varsity.During the day they were attacked by a force of German infantry and Lt-Col. G.H.D.Ford (attached to 6th Airborne Div HQ from the South Lancs Regiment) led a counter attack against them and was killed in the process.Lance remembered very clearly, over 65 years later, how it felt having to bury their dead near Kopenhof farm later in the day.

Later on the advance across Germany ‘Lance’ was acting as escort to the G.O.C. in a jeep, when he saw a German soldier run off into a wood, he jumped off the jeep and gave chase. He finally caught up with him as he ran across a clearing, towards a large group of other German troops, he dropped down behind the base of a tree and opened fire. Armed with a .303 Lee Enfield rifle he fired at them as fast as he could, all their return fire going well wide of his position. All this time the rest of his platoon were moving up and caused the Germans to withdraw.

Afterwards his section commander, Corporal ‘Joe’ Buchanan, told him he was a “silly bugger” and could get himself killed doing that sort of thing. However, he also told him they had counted 5 dead and 3 wounded amongst the enemy force. He was Initially recommended for the Military Medal for his initiative. However because it was not witnessed by an officer it was reduced to a Mention In Despatches, which was listed in the London Gazette Supplement, 4 April 1945.

Lance served in Palestine for a year, still as a member of the Defence Platoon and was given an outstanding Testimonial by his officer:

“Pte Rooke is one of the finest soldiers I have ever met. Give him a job, its done! Absolutely trustworthy and a most exceptional worker. He is obedient and very loyal to his superiors. He landed in Normandy & over the Rhine, where he was Mentioned In Despatches – were I a potential employer Rooke would be one of the first men I should employ. Haifa, Palestine. 1. 5. 47.”

In early 2006 Lance and his good friend Tony Huntbach, with their wives, participated in a tour that went from the D-Day beaches to Berlin. Along the route they paid their respects at all of the sites where they had lost so many of their friends.

In March 2010 they both attended a tour that took in the sites of Operation Varsity and visited the Commonwealth War Graves Commission Cemetery at the Reichswald where so many of their comrades from the 1st Bn Royal Ulster Rifles and other comrades from the 6th Airborne Division lie at rest. 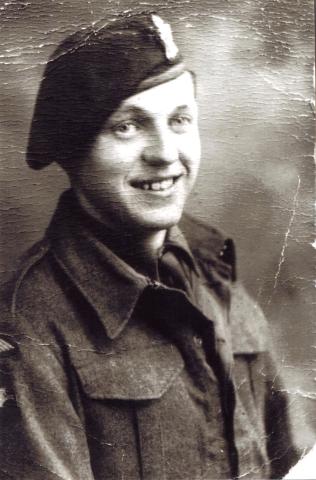