Sergeant A L 'Bailey' Sparkes was the son of Mr and Mrs Albert Leslie Sparkes of Brighton. He originally enlisted with the Royal Sussex Regiment early in the war, and was posted to the 2nd Battalion, fighting in the Western Desert in 1942.

In late 1942, a nucleus of men from the Battalion volunteered for Airborne service as the new 10th Parachute Battalion. Sgt Sparkes was among those who undertook their parachute training at Ramat David/Kabrit in early 1943. He is seen in a photo from ‘The Tenth: A record of the 10th Battalion, The Parachute Regiment’ (1965), by R. Brammall on plate No 4, as Sgt. ‘Bailey’ Sparks in February 1943. The photo states that the group of Non Commissioned Officers are from D-Company and on leave in Cairo.

It is likely Sgt Sparkes took part in the operations in Southern Italy, near the port of Taranto in September 1943 before being withdrawn to the UK in December 1943. D Company, 10th Parachute Battalion were billeted at Burrough Hill House in Leicestershire. After months of intensive training, and the disappointment of being held in reserve to 6th Airborne Division on D-Day June 1944, Sgt Sparkes finally embarked on the Second Lift to Arnhem, during Op Market Garden in September 1944.

Sgt Sparkes jumped onto Drop Zone ‘Y’ at Ginkel Heath on Monday 18 September 1944 and took part in the 10th Parachute Battalion’s actions in the Battle of Arnhem. During the course of the Battle, He was wounded and taken prisoner, and was subsequently sent to Stalag XIB at Fallingbostel, and given the POW Number 117739. On the 10 January 1945, it was announced in the London Gazzette that he had been awarded a Mention In Despatches for his actions at Arnhem.

He was repatriated back to the United Kingdom at some stage in April-May 1945. However, it is not known whether he was still in convalescence at the time. It is possible he was still suffering from his wounds, and may still have been in the Army when he died in August 1947. 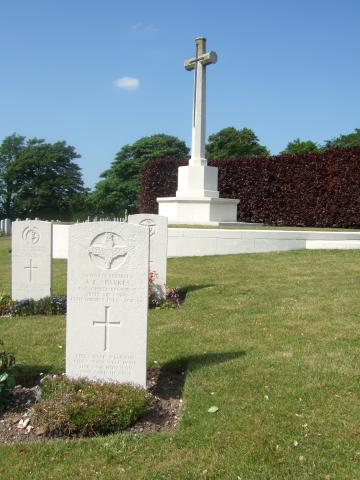