Lawrence Glyn Williams was born in Swansea, South Wales and worked as a cinema projectionist in Coventry before being called up in December 1944.

He volunteered for airborne forces and become a military parachutist after completing course B172 from 16 to 31 July 1945 at RAF Ringway, his report reads: “Average, quiet disposition, hard worker, confident.”

Pte Glyn Williams was posted to the 6th (Royal Welch) Parachute Battalion and served in the Intelligence section until demob in January 1948.

On return to England he married Joyce, who he had met at Ringway and then settled in Manchester. During a long married life he became the proud father of four girls and one boy. His working life was spent in the textile trade, selling all over the North of England and Ireland, until retiring when Joyce died in 1985.

Whilst serving in Palestine he joined The Parachute Regimental Association (PRA) and later became the Manchester branch treasurer for almost 50 years. Glyn Williams also became the Regional Secretary for the North West for nine years before retiring. He received the Colonel Commandant's Commendation from General Sir John Reith in 2010.

Compiled with assistance from Glyn Williams. 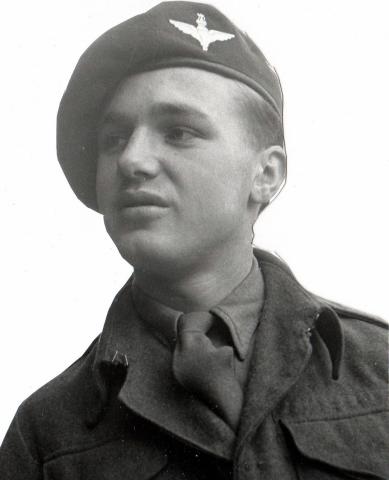