Leonard David Brook volunteered for the Army in February 1942 and joined the 58th Training Regiment, Royal Armoured Corps, at Bovington, Dorset. His first six months of initial training included instruction on driving and maintenance, gunnery, and wireless radio. He was then posted to the Green Howards Armoured Car Regiment stationed in Scarborough and spent time training on the Yorkshire moors with the armoured cars and firing live ammunition.

In May 1944 he volunteered for the Glider Pilot Regiment and underwent infantry training before being posted to RAF Booker on 25 May 1944 to undergo basic pilot training at No 21 Elementary Flying Training School until 27 July 1944. He was subsequently posted to Stoke Orchard Glider Training School where he trained on the Hotspur Glider before going to the Heavy Glider Conversion course at North Miffenham on 1 September 1944. On 13 September 1944 he flew to Ouistreham, Normandy and flew one of the D-Day Dakotas back to Netheravon. In November 1944 he was posted to C Squadron, based at Tarrant Rushton, and flew the Horsa and Hamilcar.

Sgt Brook was then posted to RAF Birch near Colchester in E Squadron and flew on Operation Varsity, the Rhine Crossing on 24 March 1945, where he was wounded and flown back to England in a C47, spending some weeks in Ronkswood Hospital, Worcester. He spent the end of 1945 flying Horsas in a number of different airfields including Aivenhall, Earls Colne, Blakehill Farm, Birch, Shobdon, Keevil, Exeter, Leicester East, Sparston and Finmere. He was then posted with ‘D’ Squadron to Palestine in February 1946. There were only a few Horsas at RAF Aqir and David was appointed assistant to the Airborne Control Officer, who was a Captain, in an office by the Control Tower. There was very little glider flying, in which he did not take part, as he was fully occupied with visiting paratroopers and issuing and collecting their 'chutes and airborne containers for dropping. Part of his job included greeting senior airborne officers flying from the UK, including Brigadier Lathbury and others and giving them transport to the 6th Airborne Div HQ.

During his spare time, which was considerable, he drove himself in a jeep all over Palestine and visited Amman in Jordan, as well as flying on leave in a Halifax to Baghdad and Cyprus.

Staff Sgt Brook was demobbed from Egypt in December 1946 and rejoined his family firm of Chartered Surveyors in Colchester.

Following his retirement, in October 1984 he obtained a list of the membership of the retired glider pilots in the GPRA and wrote to all those in East Anglia calling a meeting at Snape in Suffolk at which the East Anglian Branch of the GPRA was formed. He and three others, including Alan Richards (who painted many glider pictures) and the Secretary Adam Howard visited the Varsity memorial at Brish for the 100 Glider pilots who were killed on that operation. They asked the AAC Padre to say some prayers and this developed over the years into the regular Annual Remembrance Service and Parade, attended by the whole of 4 Regiment AAC and the Regimental Band, which has taken place ever since.

During the years when the East Anglian Branch members were able to drive themselves about, he, as Secretary, and his wife Wendy gave an annual lunch party at his beautiful home at Birds Hill, Great Bealings, which the Glider Pilot Regiment Association National Chairman attended. This continued until members became too old to drive, and this also led to branch meetings being discontinued.

All in all, David’s years as Editor of the EAGLE Journal from 1984 have meant he has a very fine archive collection of original letters and photos as well articles. He also has collected a library of military books of the Glider Pilots and the operations they took part in. 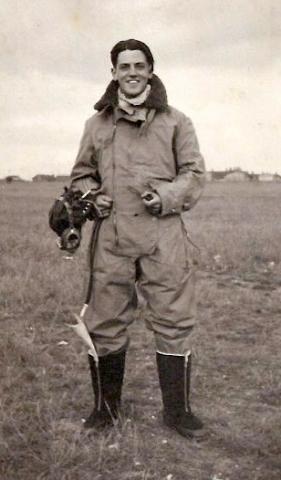