Lance Corporal Kyle Cleet Marshall was born on 30 October 1987. He attended the Churchill Community College, Newcastle. His hometown was Newcastle, although he lived in Colchester.

He completed his basic training in August 2007 and was posted to the 2nd Battalion The Parachute Regiment. He initially served in D Company, completing Op HERRICK 8 as a Private soldier. He rapidly established his leadership credentials and was promoted to Lance Corporal in January 2010 and assigned to B Company.

Lance Corporal Marshall was an outstanding soldier and non-commissioned officer. He was a leading figure in B Company during the training for Afghanistan. A popular and cheerful soldier, he was a natural leader who enthused all of those amongst whom he worked. He was a keen footballer, passionate Newcastle United supporter, and had played to county level in his youth.

Lance Corporal Marshall deployed to Afghanistan on 17 October 2010 with B Company, 2nd Battalion The Parachute Regiment. He was based in Patrol Base 4 in the Nahr-e Saraj district of Helmand province.

On 14 February 2011 he deployed as part of a platoon to a rural area near the village of Padaka. His mission was to dominate the ground near a recently occupied checkpoint to deter insurgent forces from attacking ISAF and Afghan National Army bases and the local population. At 1130hrs Lance Corporal Marshall was fatally wounded by an improvised explosive device while extracting from a compound following an engagement with insurgents.

He leaves behind his father Garry, his mother Olywn and his fiancée, Hayley, whom he was due to marry after the tour.

The family of Lance Corporal Kyle Marshall said: "Kyle was a very lively, outgoing, loving and much-loved son. He will be sadly missed by all his family and friends. 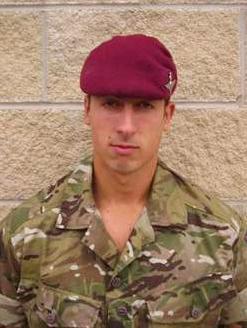 Malcolm Rowlands said:
From West Berks PRA
Farewell airborne brother. We share the deep grief of your family, loved ones and friends, but also share in the pride of what a fine paratrooper you clearly were. You were a credit to the fraternity. May you rest in peace.
Anonymous said:
Our condolences and deepest sympathy to the family and friends of Kyle Marshall for the recent loss of their son and friend.

Julian Nowak
Secretary
On behalf of the Executive Committee
and Members of the
Tyneside Branch
Parachute Regimental Association.

David Featherstone said:
From all at the Durham Branch PRA. We extend our deepest sympathy to friends and family of Kyle, a true Airborne Brother. Words are not enough.

Stuart Cook said:
From Grimsby & Cleethorpes Branch P.R.A.
We add our condolences and deep sympathy to the family and friends of L/Cpl Kyle Marshall. You died in the true traditions of the Parachute Regiment & Airborne Forces fighting for a free world. A true Airborne soldier. May you rest in peace.
garry marshall said:
Goodbye my son, my life is empty now. You were my son ,my friend, you were the bravest of the brave. My heart is broken, sleep well my hero. All my love Dad xxxxxxxxxxxx
Gwen Smith said:
I will always miss you Kyle and can't believe you're gone. I know we'll meet again some day. I miss your laugh and your grumbling! Love You Always. Auntie Gwen x x
Sue Land said:
I never knew you Kyle or even knew of your existence until this morning when I met your dad during a taxi ride , I just wanted to say your a true hero in my eyes who's paid the ultimate sacrifice of life to ensure GB continues to have the freedom and democracy it is so proud of ....RIP brave young man
Add your comment