Kevin R Sealey lived in Trowbridge in Wiltshire and left school in 1976. He then completed an engineering apprenticeship. In 1981 after watching the film “Fit to Drop” about 462 Platoon (Pln) going through P Company (Coy) in 1980, Kevin informed his girlfriend that he was going to join The Parachute Regiment.

In September 1982 Kevin started his basic training with 487 Pln but broke his foot on P Coy and Passed Out on 21 October 1983 as GPMG (General Purpose Machine Gun) Champion Shot with 492 Pln. 492 Pln had 72 recruits only 23 of which passed.

Private Sealey was posted to 7 Pln, C Coy, 3rd Battalion The Parachute Regiment (3 PARA) who were based at Greenham Common, he then went to Belize with 3 PARA in 1984.

In November 1985 Lance Corporal Sealey joined A Coy 3 PARAand served in Cyprus with the United Nation in 1986.

Corporal (Cpl) Sealey was posted to JPC (Junior Para Company) as an instructor in 1988 for two years.

Cpl Sealey served in Northern Ireland on Operation Banner with B Coy 3 PARA in October 1990.

He climbed Kilimanjaro in 1991 and returned to Northern Ireland in 1992.

Sergeant (Sgt) Sealey joined A Coy 3 PARA in April 1993, before serving with the Training Team in Botswana. He returned to Patrols Pln, D Coy 3 PARA in 1994 and the following year ran the battalion’s Snipe Course and on completion was an instructor on Sniper Concentration in Canada.

Another tour of Operation Banner followed in 1997, later that year he was a member of the British Army Shooting Team in Canada.

C/Sgt Sealey was posted to 3/504, 82nd Airborne Division at Fort Bragg in USA in April 1998 and in May 1999 he became the first foreign Senior Non Commissioned Officer to be inducted into The Sergeant Audie Murphy Club.- a private U.S. Army organization for enlisted non-commissioned officers (NCO). Members must ‘"...exemplify leadership characterized by personal concern for the needs, training, development, and welfare of Soldiers and concern for families of Soldiers”. He was then promoted to a Warrant Officer II (WOII) while serving with 3/504, 82nd AB as the Battalion’s Training Sargent Major Training Battalion’s, at Fort Bragg.

WOII Sealey was posted to 1st Battalion The Parachute Regiment (1 PARA) as Company Sergeant Major of Headquarters Coy. He was then deployed to Sierra Leone with 1 PARA on Operation Pallister in May 2000.

After attending Military Language School at Beaconsfield in early 2001 WOII Sealey was posted to Salalah, Oman for three years, returning to Warminster in April 2004.

WOII Sealey retired in October 2004. During his military career he had also served in Brunei, Kenya, Norway, Denmark and France. 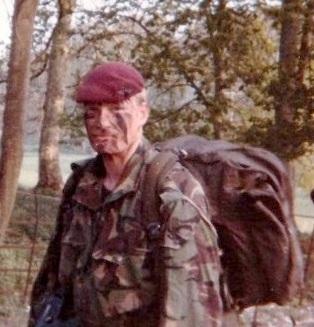