Gunner Kenneth Baker was the son of William Francis and Florence Baker, of Barnton, Cheshire.

He enlisted into the Royal Artillery and volunteered for airborne forces, qualifying as a military parachutist on Course B183 which ran at RAF Ringway from 22 October to 14 November 1945.

He served with 2nd (Airborne) Forward Observer Unit, RA, in Palestine as part of the 6th Airborne Division, and was one of the occupants of a jeep who was killed by the detonation of a kerbstone (also known as a kilostone) mine on the Jerusalem to Jaffa road.

The occupants of the jeep included Gunner Cyril Pearson, who attended the same parachute training course, and was also killed by the explosion.

Major General Dare Wilson, in his book ‘Cordon and Search’ records:
“Specimens of the kilostone type were later found during search operations, and dissected for examination by the Divisional Royal Engineers. They were found to be constructed in the shape of a kilostone, or white kerbstone, such as was used to mark the verges of some roads in order to assist drivers. In a rear compartment they contained a charge of some 25 lbs of mixed explosives, in front of which was packed a similar weight of small steel rivets to act as shrapnel. The finished article was painted white, sometimes even coated with plaster of Paris, and was very difficult to tell apart from the real object. The force with which the rivets were blown out of the mine was sufficient to penetrate all but armoured vehicles, and the blast usually blew them off the road and frequently set them on fire. The effect was lethal providing that the detonation was correctly timed when the vehicle was opposite to the mine, and if the blast and rivets both failed to cause death, the resultant fire was likely to do so.” 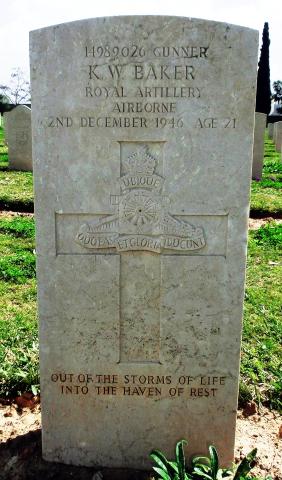