KENNETH DARLING believed passionately in the British soldier and devoted his life to the service of his country. Smallish in stature but tough and resolute, he would stand no nonsense from anyone, particularly the enemy, who was soon made aware of his presence.

When he took over as Director of Operations in Cyprus in October 1958 it was an island terrorised by Eoka. With 35,000 men under his command and with the full support of the British government, Darling immediately began to terrorise the terrorists and those who had any sympathy for their cause. Curfews were imposed: then Naafi personnel normally recruited from the Cypriot local population were replaced by British residents on the island. He dealt admirably with the flak which followed.

He was less interested in the individual cells that make up terrorists' units, he wanted their leaders. Along with his battalion commanders he devised a scheme of constant surveillance which made it extremely difficult for anything to happen without its being observed. Every move by the terrorists, as their nerves cracked, was noted. At last a house was pinpointed and the Eoka leader Grivas's second-in-command, Matsis, was found hiding beneath the stone floor. He refused to surrender and was killed in a grenade attack. By Christmas, just three months after Darling's arrival, Eoka had called a truce. By the time he left he had justifiably earned the respect of the Cypriot nationalist government.

Darling was born in India, educated at Eton and Sandhurst, and commissioned into the Royal Fusiliers in 1929. During the Second World War he commanded the 11th (TA) Battalion of his regiment before volunteering for airborne forces and, after training, he took command of the 1st Parachute Battalion. His predecessor was the much-loved and highly decorated Alastair Pearson, who had commanded them in North Africa and Sicily. He was a hard act to follow. Darling realised that he was not liked and he was pleased to be moved to the 12th Battalion as their second-in-command.

He dropped with them into Normandy, was wounded and returned to England. He was determined to fly to Arnhem on D Day plus 2 to see how the 1st Airborne were fairing. His place on the plane had to be given over to a senior officer and he travelled on the next flight. The first plane was destroyed by enemy fire. When the CO of the 12th Battalion was killed, Darling took over command and was involved in some of the toughest fighting in the Ardenne en route to the Rhine crossing.

In 1946 he went to Java to take command of the 5th Parachute Brigade in difficult circumstances. Short of men, he had to use disarmed Japanese soldiers to control internal disorders. From 1948 to 1950 he commanded the Airborne Forces depot, where as Regimental Colonel he set about firming up the foundations of the Parachute Regiment as part of the peacetime order of battle.

In 1950 he took command of the 16th Parachute Brigade. Since the war he felt the very essence of the airborne forces was being drained. He set about reorganising parachute training and revitalising tactics, and gave guidance to the Royal Air Force in their training for combined airborne operations.

His robust personality was next felt in Egypt, where vital British interests were at stake. As Chief of Staff, HQ 2nd Corps, when the Suez crisis broke he patiently and skilfully planned the military operation. After Cyprus he became Director of Infantry, from 1960 to 1962, and then went to Germany as General Officer commanding the 1st British Corps, which at one point was put on full alert during the Cuban missile crisis. He came in contact with closed-circuit television and immediately saw its potential for the battlefield. After BAOR he became GOC-in-C, Southern Command, where he had responsibility for the strategic reserve and for planning its operations in conjunction with the RAF and Royal Navy, particularly during the final rearguard actions of the withdrawal from the campaigns in Borneo and Aden.

From 1967 to his retirement in 1969 he was Commander-in-Chief, Allied Forces, Northern Europe. 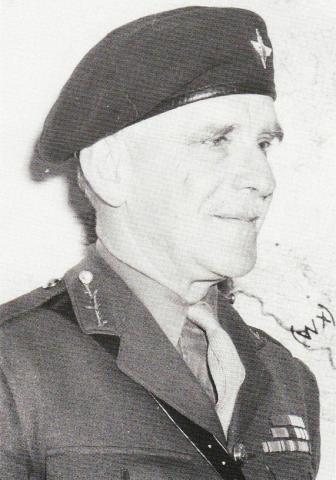