Kenneth Richard James was born on 31st December 1919 the only son of Frederick and Alice James of Parkstone, Dorset.He enlisted at Portsmouth in the RAOC on 12 October 1936 and first saw action with the British Expeditionary Force between September 1939 and June 1940. He later went on to serve in campaigns in North Africa and Italy. As a Warrant Officer, he completed his Parachute Jump Training at Upper Heyford in the Winter 1947-8, attached to 9 Battalion, Royal Army Ordnance Corps, based at Donnington.

He then transfered to the 16th Independent Parachute Brigade and saw service in the Suez Canal Zone from June 1951 to July 1954 and in Cyprus for eighteen months from September 1959 to April 1961. He was also deployed to Germany as part of the BAOR, before returning home to take up a commission in the RAOC. This led to postings in Scotland and Singapore before retiring from the Army in 1967. He died in 1988 leaving a widow Trudy, three children and a granddaughter. 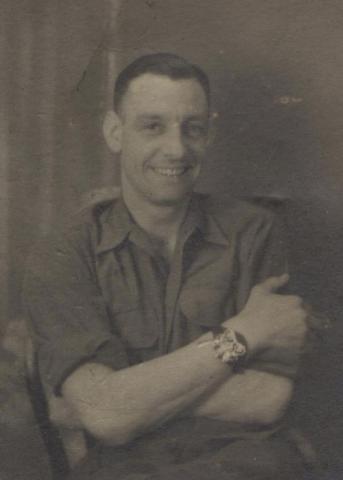