Kenneth Maver was born on 21 March 1926 in West Derby, Liverpool, to George and Sarah Maver. He recalled his early family life as being very happy, with his father never being without work and his schooling being successful, until such a time as it was bombed and he was forced to leave prematurely.

By 1940 he had joined the Army Cadets with the knowledge that he would be called up at some point. His brother George had gone to Crete and in 1941 he was captured and made a POW, spending four years in Stalag 18A in Austria. Ken recalled that how at this time, he was assisting the Home Guard when they spotted a German plane heading towards Liverpool. Having some experience, he was told to man the guns and the plane ended up at the bottom of the Mersey!

Private Maver was called up in July 1944 and was sent to the King’s Own Yorkshire Light Infantry and then to The Parachute Regiment. He attended Parachute Training Course number B148 at RAF Ringway between 6-29 January 1945.

His instructor noted that he was ‘a good performer, very keen and should improve’. He was then posted to HQ Company, the 3rd Parachute Battalion, and sent to Palestine.

Private Maver was released to the Reservists, and discharged in 1959.

Ken married Gabrielle and had two children, Damon and Ailsa. He worked as a sheet metal worker, before attending night school and becoming a college lecturer at Openshaw Technical College, Manchester.

He enjoyed the countryside, walking and cycling, and in his retirement moved to North Wales.

By Rebecca Blackburn with information supplied by Ailsa Gill 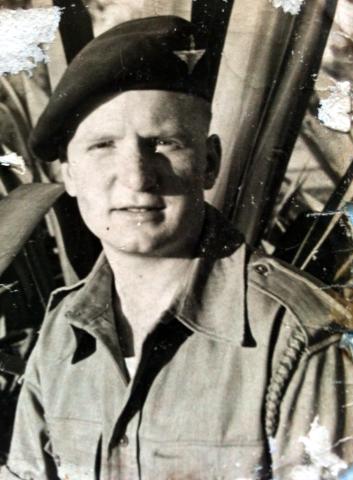