Kenneth John Geere was the son of John Harold and Mercy Geere, of Worthing, Sussex. He enlisted in Royal Army Service Corps and volunteered for airborne forces.

Dvr Geere was in a glider, Horsa HG 453 (Chalk Number 927), which crash landed in the river foreland near Veerweg at Wageningen on 18 September 1944. He died of wounds, aged 20, in the local Ziekenzorg Hospital on 19 September 1944, and was buried together with three US Airforce personnel in the Wageningen General Cemetery on the same day. An American army unit exhumed the four bodies on 21 March 1946 for re-internment in the Ardennes American Cemetery at Neuville-en-Condroz, Belgium. During the final identification it was discovered that one of the casualties was British. His remains were therefore re-interred in the nearest British War Cemetery, at Heverlee, near Louvain (Belgium). (Roll of Honour, 5th revised edition, 2011).

If you are part of Dvr Geere’s family and would like to complete this biography, you can apply to the Curator to do so. To do this you will need to become a member of ParaData and select the 'friend or family member' option on the registration form. 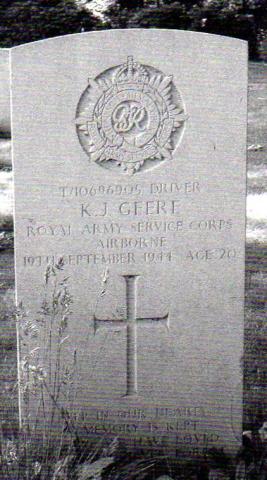