Ken was a private within 225 Parachute Field Ambulance who dropped into Normandy at about 01:00 on 6th June 1944.

225 PFA were tasked in setting up a Medical Dressing Station in a small Chateau at Le Bas de Ranville. They subsequently moved to establish a new MDS (medical dressing Station) in the quarries near L'Ecarde.

He was also involved in the Ardennes in January 1944 and then in the Rhine crossing later that year and the subsequent advance to the Baltic.

Finally he was on his way to the Far East when the Atomic bombs were dropped on Japan and was demobbed in November 1945.

As was the case for about a third of 225 PFA Ken was a conscientious objector. Prior to volunteering for Para Medical duties he had volunteered for bomb disposal with a Royal Engineers unit. 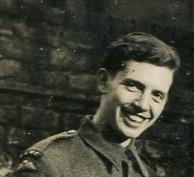