Kenneth Gunter enlisted in the Lancashire Fusiliers. He was granted an emergency commission on 14 November 1942, and posted to A Company, 52nd Oxfordshire and Buckinghamshire Light Infantry (also known as 2nd Battalion, Ox and Bucks).

He commanded 13 Platoon and saw action on D-Day in Normandy, in the Ardennes December 1944 and on the crossing of the Rhine, 24 March 1945. He was wounded on the night of 24-25th March and later awarded the Military Cross (MC) for his actions during Op Varsity. The announcement of his award appeared in the London Gazette on 24 January 1946:

'Lieut. Gunter has commanded a platoon in the regiment since landing in Normandy on 6 June 1944 until he was wounded after the crossing of the Rhine on the 24 March. Throughout the whole period he has inspired his platoon by his constant example of courage and devotion to duty. On 24 Mar 1945 Lieut. Gunter landed in the centre of a group of Lt AA Guns which had already caused considerable damage to other gliders. Lieut. Gunter’s own glider was under heavy fire, but without hesitation he rallied all unwounded men and cleared the landing zone. During this operation he knocked out twelve guns. Immediately this task was completed he led his platoon onto capture their original objectives. Lieut. Gunter’s fine leadership has also been displayed in the frequent patrols he carried out across the River Maas when he came back with accurate information as to the enemy’s dispositions.'

After the war, he trained as a teacher and taught in Nottinghamshire and West Sussex. He retired to Cornwall and then moved to Devon, where he died in 1997. 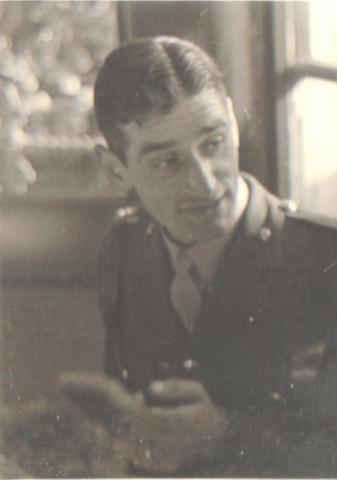