Kenneth Boss was the son of George Frederick and Bertha Boss, of Pitsea, Essex.

He was granted an emergency commission with the Royal Artillery on 1 January 1944 and volunteered for airborne forces later that year.

Lt Boss qualified as a military parachutist on course 138, which ran at RAF Ringway from 16 to 28 October 1944, and was posted to 2 (Airborne) Forward Observation Unit, Royal Artillery (2 FOU).

He took part in the Battle of the Bulge in the Ardennes, while serving as an Acting Captain.

A/Capt Boss was later awarded a Military Cross for his actions on 11 February 1945, while serving in the south eastern part of the Netherlands at Roermond. He was amongst a group ordered on a mission to cross the River Maas and penetrate 3,000 yards behind enemy lines. A/Capt Boss was commended for  ‘displaying remarkable qualities of leadership, courage and aggression for a junior officer’. 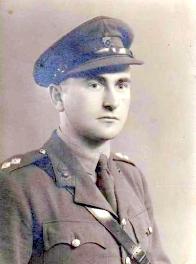