He initially served in the Royal Engineers (Ordnance Survey), transferring to the Glider Pilot Regiment in Oct 1943. From here he joined 'F' Squadron at RAF Broadwell as a Horsa pilot in January 1944.

He flew in Operation Mallard (6th June 1944) and also Operation Market Garden (September 1944) where he was captured and held as a POW at Stalag IVB until being released by the Russians in May 1945.

After the war he remained with the Glider Pilot Regiment flying gliders until 1950. From here, he transferred to Austers in north-west Europe and Malaya until 1956, training to fly helicopters the following year in 1957. This led to a period of service with 12 Flight VIP Flight flying Alouettes.

Having attended the Central Flying School in 1960, he qualified as a Qualified Helicopter Instructor (QHI), holding QHI positions at Middle Wallop, British Army of the Rhine (BAOR) and in Northern Ireland before taking his commission in 1964.

Finally he was Senior Standards and Examining Officer at Middle Wallop. 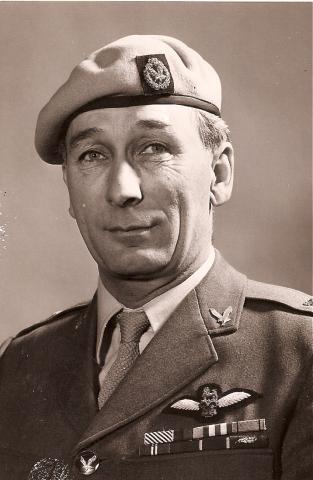