Lance Corporal Joshua Leakey, 27, of the Parachute Regiment, has been awarded the Victoria Cross, the premier award for gallantry in the presence of the enemy.

On the 22 August 2013, Lance Corporal Leakey, deployed on a combined UK/US assault led by the United States Marine Corp into a Taliban stronghold to disrupt a key insurgent group.

On leaving their helicopters, the force came under machine gun and rocket propelled grenade fire, pinning down the command group on the exposed forward slope of a hill. For an hour the team attempted to extract from the killing zone; a Marine Corp Captain was shot and wounded and their communications were put out of action.

"When you hear there’s a man down, the hairs on the back of your neck stand up. Clearly then your plans change."

Realising the seriousness of the situation - and with complete disregard for his own safety he dashed across a large area of barren hillside being raked with machine gun fire. As he crested the hill, the full severity of the situation became apparent: approximately twenty enemy had surrounded two friendly machine gun teams and a mortar section, rendering their critical fire support ineffective.

Under fire yet undeterred by the very clear and present danger, Lance Corporal Leakey ran across the exposed slope of the hill three times to initiate casualty evacuation, re-site machine guns and return fire. His actions proved the turning point, inspiring his comrades to fight back with renewed ferocity. Displaying gritty leadership well above that expected of his rank, Lance Corporal Leakey’s actions singlehandedly regained the initiative and prevented considerable loss of life.

"It’s massively humbling to put me alongside other people who have received this award. I’m conscious that there were other men on the ground that day who were doing their job just like everyone does. I see this as a massive honour for the Parachute Regiment as a whole. It is overwhelming. And I think it probably always will be."

Prime Minister David Cameron gave a reception for recipients of the latest military honours at 10 Downing Street on 25 February 2015.

“It is absolutely right that Lance Corporal Leakey has been awarded a Victoria Cross. He epitomised valour with his actions on that hillside in Helmand. When you hear how events unfolded and the intensity of enemy fire, it is difficult to imagine how one wouldn’t be frozen to the spot and yet Lance Corporal Leakey risked his life to run across that barren hillside not just once, but multiple times, to turn the battle and save the lives of comrades. And that is why he deserves the highest honour for bravery the nation can give."

'I am delighted to announce that Her Majesty The Queen has been graciously pleased to award 30014428 Lance Corporal Joshua Mark Leakey, of The Parachute Regiment, the Victoria Cross for displaying exceptional valour on operations in Helmand Province, Afghanistan on the night of the 22nd August 2013.

I would like to take this opportunity to congratulate Lance Corporal Leakey on this hugely well deserved award. His actions displayed bravery, selflessness and professionalism of the highest standard. His conduct was in the very best traditions of The Parachute Regiment.

Lance Corporal Leakey’s actions were undoubtedly in accord with the Regiment’s watchwords of professionalism, resilience, discipline, versatility, courage and self-reliance, as highlighted in the Regimental Charter. But, the famous words of our second Colonel Commandant probably sum it up best:

‘They have shown themselves to be as tenacious and determined in defence as they are courageous in attack. They are, in fact, men apart – every man an Emperor’.

Profile photo courtesy of the MoD

Citation for the award of the Victoria Cross to Lance Corporal Josh Leakey, London Gazette, 26 February 2015. 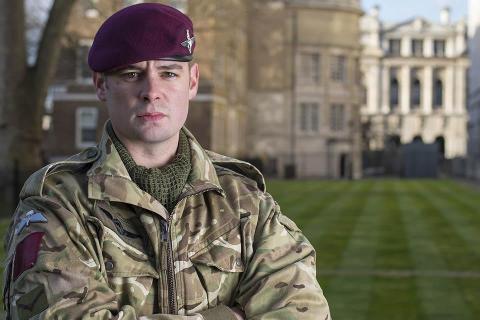