Private Joseva Saqanagonedau Vatubua served with The Argyll and Sutherland Highlanders, 5th Battalion The Royal Regiment of Scotland (5 SCOTS), as part of the 2nd Battalion The Parachute Regiment (2 PARA) Battle Group, before being killed in action in Afghanistan on New Years Day, 1 January 2011.

Private Vatubua was born on 25 February 1986 in Suva, Fiji where he grew up and attended Laucala Bay Secondary School. He joined the British Army in 2007 and successfully completed the Combat Infantryman's Course at the Infantry Training Centre Catterick in December 2007. He was posted to B Company 5 SCOTS as a rifleman, where he has served since.

Private Vatubua quickly settled into battalion life and relished his role as a combat infantry soldier. He played a key role in all of B Company's Mission Specific Training, including deploying on Exercise GRAND PRIX 7 in Kenya in April and May 2010. A keen rugby player who was one of the stars of the Battalion team, he had recently begun representing the Army at Rugby Sevens.

Private Vatubua's future was bright and he had already caught the eye as a young man who would rise through the ranks. He had hoped to attend a Potential Junior Non-Commissioned Officer's Course after completing Operation HERRICK 13, where he would undoubtedly have excelled.

Private Vatubua deployed to Afghanistan on 21 October 2010 with B Company 5 Scots where he was based in Check Point Salaam, near Patrol Base 5, in the Nahr-e-Saraj District of Helmand Province.

On 1 January 2011 he was part of a deliberate company operation to target known enemy firing positions to the North of the village of Saidabad Kalay. At 1715hrs an explosion occurred which is assessed to be the result of an improvised explosive devise placed in the wall of a compound, which tragically killed Private Vatubua.

He leaves behind his wife Claudette. 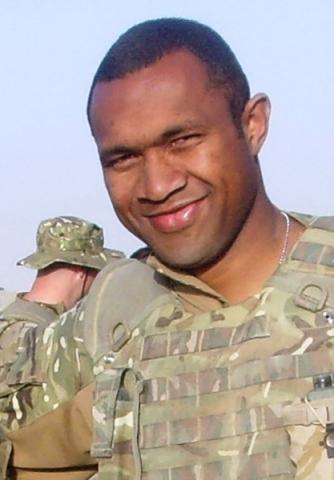