Private Joseph Pagan, son of Thomas and Theresa A Pagan, of Carlisle, served with HQ Company, 1st Battalion (Airborne), Border Regiment. He originally enlisted with the Border Regiment (prior to 1942) and is believed to have served with 1st Battalion in Sicily, before taking part in the Battle of Arnhem, during Op Market Garden. After escaping back to the UK, following his Return across the River (RAR), he was amongst the troops sent to Norway as part of Op Doomsday to keep order and disarm the German forces in Norway in May 1945.

Private Pagan and twelve other members of Signals and Pioneer Platoons of HQ Coy were flown to Norway in a Stirling Mk V LK146 of 1096 Squadron RAF on 10 May 1945. The aircraft crashed in fog enroute to Gardemoen airfield, 30 miles north-north-east of Oslo.

Private Pagan was amongst those killed instantly in the crash on 10 May 1945, aged 25 years old. He is now buried along with all other Border Regiment soldiers killed in the crash at Western Civil Cemetery, Oslo, Norway where the casualties were later reinterred.

Compiled with assistance from Phil Jennett. 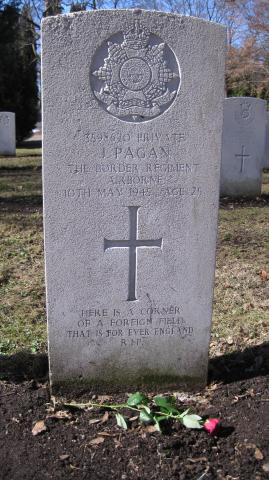