After volunteering for the airborne forces from The RASC he was send to RAF Ringway to conduct his Parachute Jump Instruction. He attended Course 83, which ran from 15 to 24 Sept 1943. His Instructor noted this about him: "Consistent on ground training, no nervousness, good stickman'

Pte Millward then became a member of B Coy, 9 (Essex) Para Battalion. He was awarded a Military Medal for his bravery in Normandy June 1944.

In le Plein and St Come Pte Millward was a member of a rifle section. On the evening of 6 June 1944 the battalion was holding part of the village of Le Plein , and was being sniped and mortared by the enemy. Pte Millward was wounded in the face by shrapnel but refused to leave his post.

On 12 June 1944 the battalion was heavily attacked at St Come by enemy infantry, self-propelled guns and tank. Pte Millward's section was part of the defence of a road leading into battalion position. An enemy tank engaged his post at very close range, and 3 of Pte Millward's companions were killed and Pte Millward was wounded again. Despite this he refused to leave his post until the tank was driven off by Anti Tank guns.

By his courage and lack of consideration for his own wounds Pte Millward set an example that inspired the rest of his Company.

Created with information and images kindly supplied by Joe Lee and Pegasus Archive. 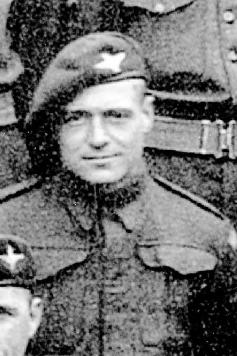